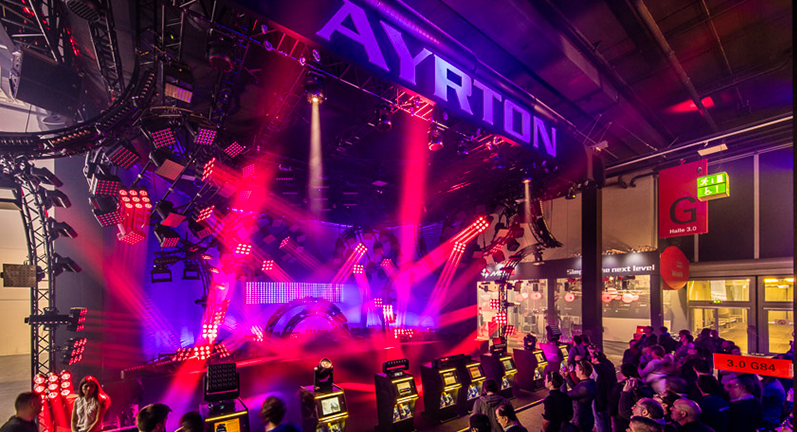 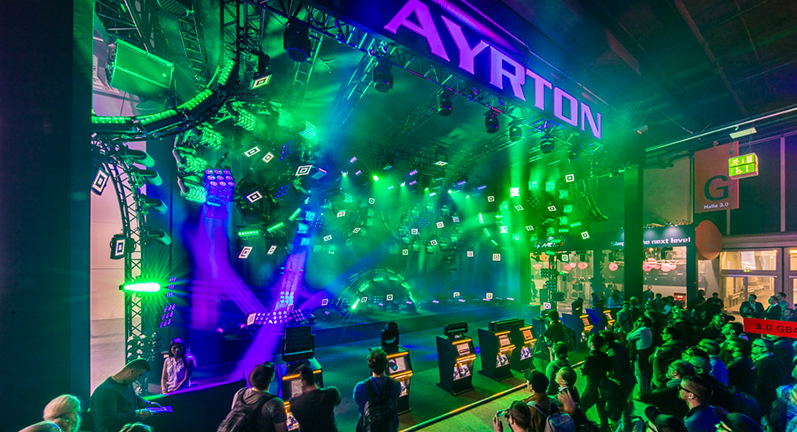 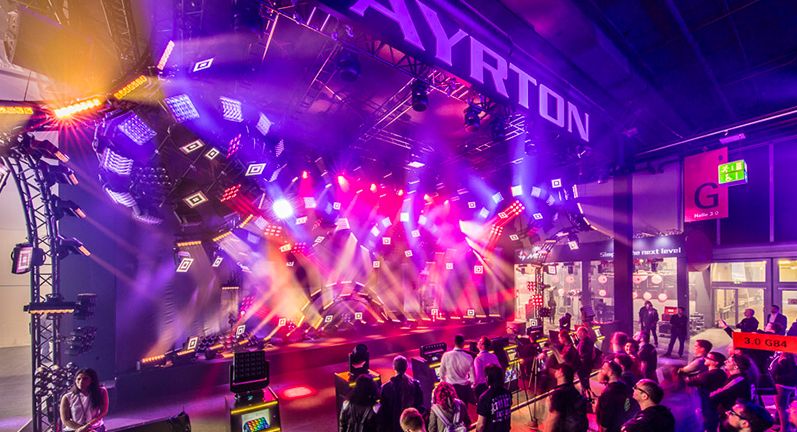 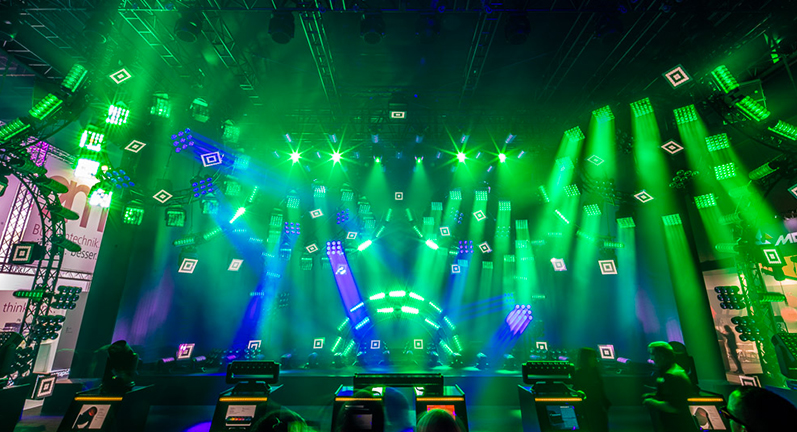 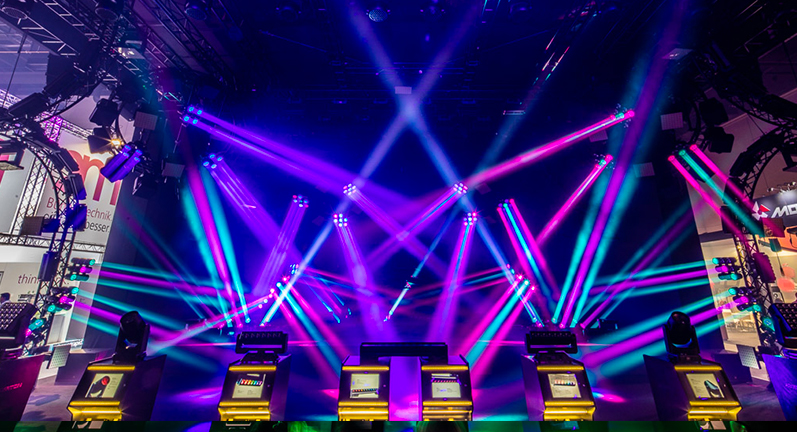 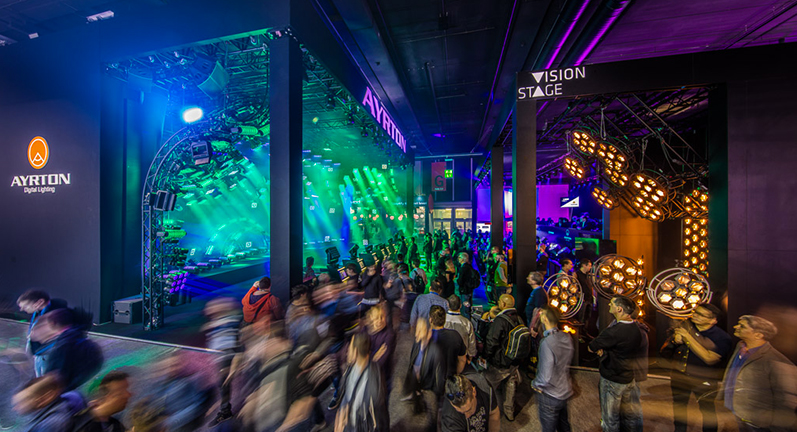 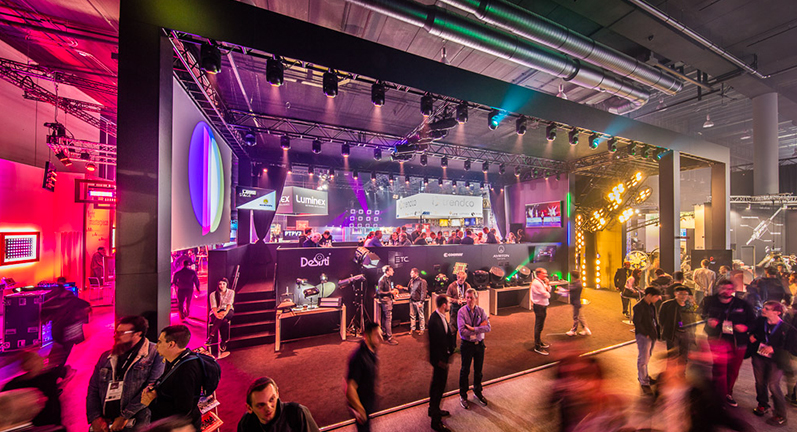 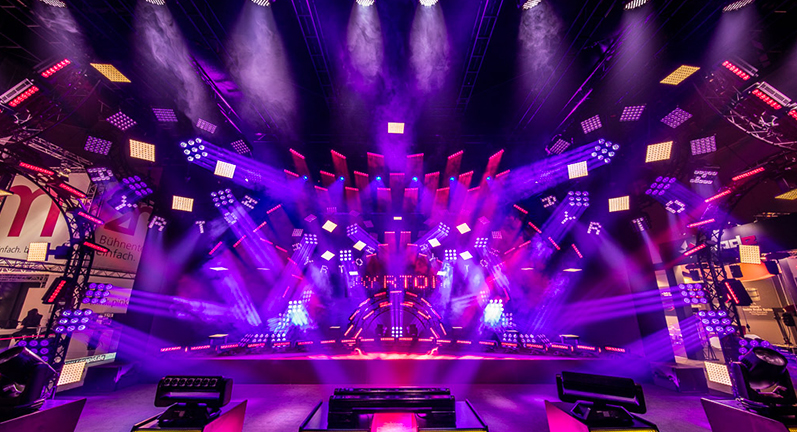 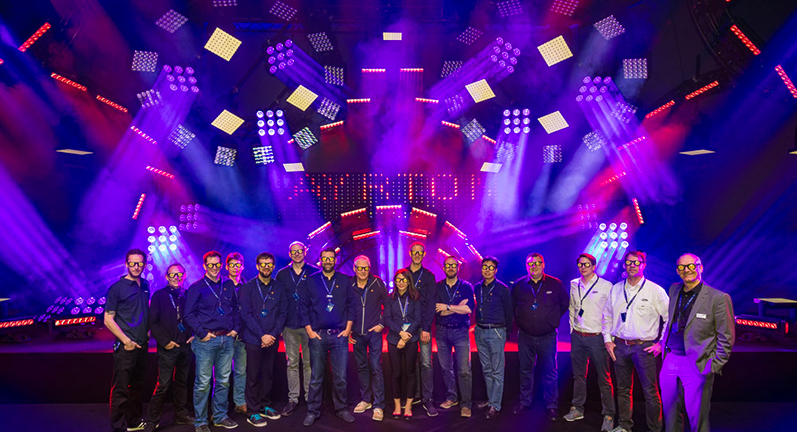 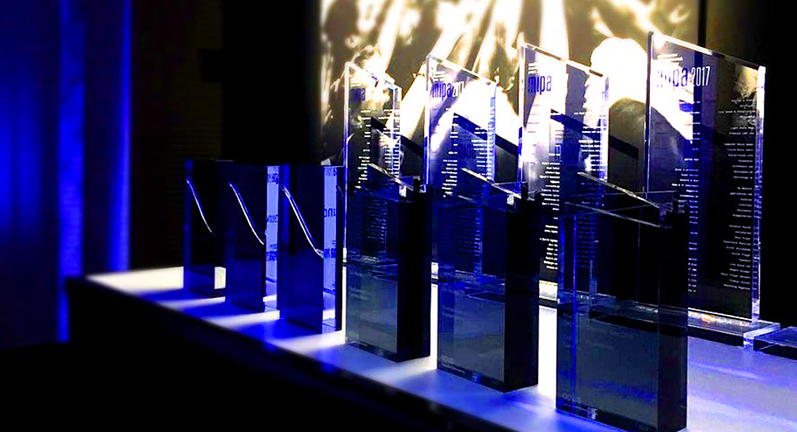 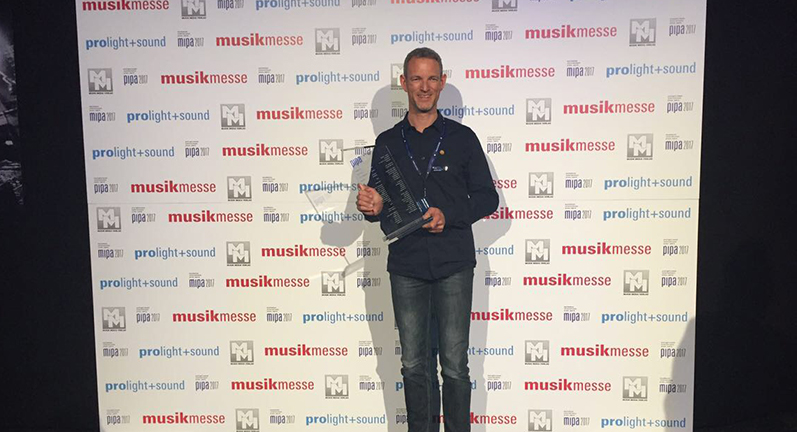 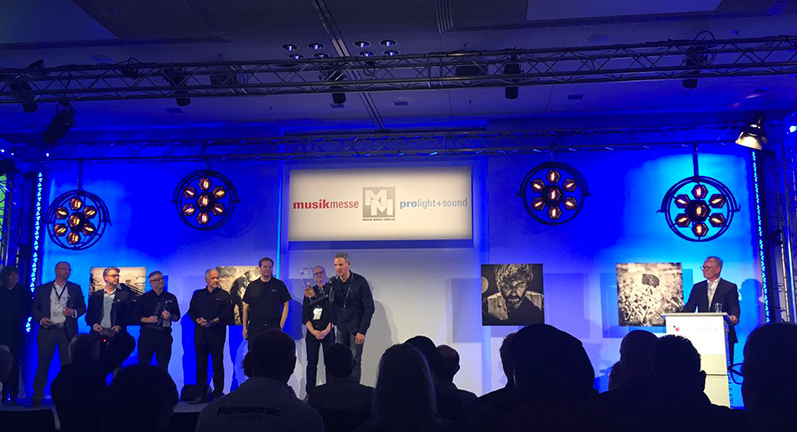 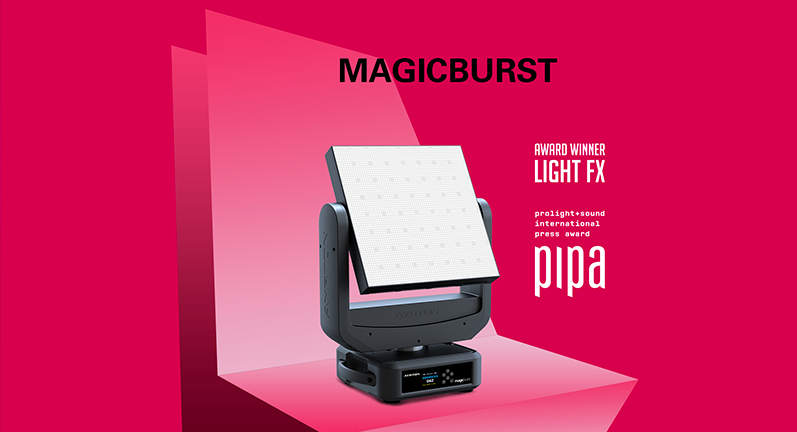 Ayrton Celebrates 15th Anniversary with new products – and an Award – at Prolight+Sound, Frankfurt 2017

Ayrton celebrated its 15th anniversary at Prolight + Sound with new products, new staff and a prestigious PIPA Award in the Light FX category for its MagicBurst™ graphic LED strobe fixture.

This is the fourth year for the Prolight + Sound International Press Awards (PIPA), which are voted for by journalists from over 100 dedicated specialist magazines across the international music and technology sector.

“To be given the PIPA 2017 Light FX Award for MagicBurst is very satisfying and a nice industry recognition of the continuation of Ayrton’s ingenuity and originality in product design,” says Ayrton’s new global sales director, Michael Althaus. “It tops what has been an excellent show for Ayrton where we experienced a really fantastic reception of our new products by the many visitors who came to check them out and see them in action in our light show.”

The company also announced an expansion in its staff prior to the show with the addition of Michael Althaus as global sales director, Christopher Agius Ferrante as CEO, Simon Gasch as regional sales manager and Chunyan Hou as the new legal and administration manager. The new staff line up complements the excellent team led by Founder and CTO Yvan Peard and will safeguard the continued success of Ayrton going forward. “We feel the best way to ensure that Ayrton remains at the forefront of the industry and continues to be a success is to invest in people,” says Ferrante. “These are exciting times for the company and this increase in resources shows the depth of our commitment.”

Ayrton chose Prolight + Sound to introduce an exciting new line of luminaires with product names that evoke the winds of the world. The new names symbolise the lightness embodied in the fixtures, along with the fluidity of design and breath of innovation that Ayrton brings to the marketplace of entertainment lighting.

Ride the Wind with Merak™
The first luminaire in this new line, which made its debut at Prolight + Sound 2017, is a technological marvel called Merak™.

Forever pushing the envelope when it comes to innovative technology, Ayrton has developed Merak as a compact wash fixture that combines punch with enhanced performance. Its new design squeezes a whole lot of washlight into a package that is less than 40cm high, with a new 250W RGBW multichip LED module and Fresnel lens, to create a mono-source luminaire that is a marvel of ingenuity.

It is a powerhouse of technology that features a proprietary 10:1 optical zoom system, combined with a 250-Watt low-etendue, RGBW multichip LED module. Merak produces magnificent output with a remarkable spread through specially developed optics, combining a four-chip-per-colour RGBW LED module with light pipe technology to ensure a perfectly homogenous colour mix is transmitted through its rosette lens. Merak produces superior colours – even in the yellow, orange and amber range, and features a white chip at 6500K. A de-focusable rotating beam shaping optic, which can be variably positioned with respect to the light pipe, provides control latitude from subtle softness to perfect sharpness.

The fixture’s zoom range is a fantastic 7° to 70° paired with a new Fresnel lens design to ensure perfectly homogenous colour mixing regardless of beam angle. With its single-source transmitting lens, Merak™ casts wonderfully crisp light and just one shadow – something all lighting designers will love. Merak features a new miniaturised liquid cooling system that was specially developed to ensure the powerful LED module is properly cooled and to guarantee continuous full power operation without dereating.

Merak, which will be ready to ship at the end of June, received a great reception at Prolight+Sound, with even established Ayrton customers happy to see the new line from Ayrton. “Everybody is excited to see that Ayrton is not just staying in the niche of top-notch effect lighting, but has expanded its portfolio still further by chosing to bring its ideas, engineering, know-how and innovation into the more widely used ‘bread and butter’ products,” says Althaus.

Introducing ArcaLine™3
The second new arrival at Prolight + Sound was ArcaLine™3, the latest product in the Static Luminaire range. With ArcaLine™3, Ayrton’s ArcaLine™ unit has had a total makeover, making V.3 a refined fixture that produces outstanding results which are even more attractive to event suppliers.

Each ArcaLine 3 fixture now consists of two distinct parts: the tubular optics and a slender base that houses the electronics, with stabilizing feet at either end that permit the tube to be tilted with no restraint. The one metre-long linear luminaire houses 12 next-generation RGBW high-output LED emitters that can be controlled point-by-point. It has a new 45 mm collimator that projects an 8° beam angle – narrowed from the 12° found on previous units. The new lens employs a rosette pattern, to decrease the diffusion of light energy and concentrate it. The result is a vastly improved colour mix. The central beam intensity of the LED emitters has also been increased by a factor of 1.5, achieving 63 candela/lumen (compared to the previous 40), which is a testament to point-by-point design.

Each can be controlled separately to create virtual tableaus or to highlight scenery on stage, while the improved stability make it ideal for floor mounting downstage or on a drum riser, or for use as a component of scenery. To facilitate set up for event suppliers, Ayrton has made the new ArcaLineTM3 configurable directly from the touch screen on the base, while small straps running along the rear of the fixture make cabling easier than ever. And if that wasn’t enough, ArcaLine™3 is rated IP65 – so essentially, weather proof. Each enclosure contains a Bopla pressure relief valve to guard against internal moisture. The fixture automatically evacuates potentially harmful moisture, which permits it to be installed outdoors for extended periods.

ArcaLine™3 has been created for use both indoors and outdoors, in all types of environment and in all weather conditions. The new design allows the luminaire to be used in multiple configurations without additional accessories, and event suppliers will especially appreciate the new attachment point on the base that provides easy connection for truss clamps.

Like Merak, Arcaline 3 will also be ready for shipping at the end of June.

More Magic from Ayrton with MagicBlade™-FX
Last, but most definitely not least, Ayrton chose Prolight + Sound for the official launch of its new MagicBlade™-FX fixture. With MagicBlade-FX Ayrton adds more magic to its Creative Solutions line of graphic beam projectors with a unit that combines the originality of its award-winning MagicBlade™-R and beauty of MagicPanel-FX to become the epitome of elegant versatility.

MagicBlade™-FX is an elegant rotating baton fitted with seven of the distinctive squared output 65mm fixed frontal lenses found on MagicPanel™FX. It shares the same quality of colour mixing and versatile effects: 3D volumetric projections, variation between the colour-rich luminescent face or separated points of light… with ultra-tight beam projection or wide angle wash from a unique zoom system with no visible moving parts.

Each emitter combines an ultra-powerful RGBW multichip LED source with a light pipe zoom system that homogenizes the colour mix and an aspherical transmitting lens, which is optimized to project a tight 3.6° beam.

MagicBlade-FX features a state-of-the-art short-stroke zoom with a 15:1 ratio for a wide zoom range from 3.5° to 52°. The zoom has no visible moving parts and, fronted by its squared frontal lens, generates seven fat beams that zoom to increase the visual impact of light that appears and disappears when programming 3D effects. This optical system allows designers to create an exceptional colour mix with visually sophisticated results through direct control of the RGBW chips of each emitter. Multiple colour effects can be achieved point by point.

The versatility of the MagicBlade™FX makes it an indispensable tool for any lighting designer. Used for back lighting, it can create a lens moiré effect. With its volumetric beams in unlimited continuous rotation on the pan/tilt axes, this luminaire helps highlight a performing artist from the side or front.

MagicBlade™FX has the same form factor as MagicBlade™R, so can be integrated into a rig just as easily, and uses the identical control protocols: DMX-512/RDM, ArtNetTM and wireless DMX via an on-board LumenRadio receiver with external antenna. Driven by three-phase hybrid stepper motors, it is a solid and reliable performer, capable of crisp positional movement and glorious sweeps in continuous rotation.

The stunning demonstration video for MagicBlade-FX was released in early March and orders followed swiftly after. Shipping of MagicBlade-FX is underway, and it is already out on its first global tour. If you haven’t already seen the magic it can produce, check MagicBlade-FX out on the Ayrton website here http://www.ayrton.eu/tube/ or on Vimeo at https://vimeo.com/204904769

Ayrton treated visitors to another incredible light show at Prolight+Sound in a display of 360 fixtures that featured the new products Merak™, MagicBlade™-FX and Arcaline™3, alongside products which were first previewed at the 2016 show such as MagicDot™-SX, MagicPanel™-FX and MagicBurst™. A video of the tremendously creative show, designed once again by noted French lighting designer, Stéphane Migné, with the assistance of programme Arnaud Pierrel on the console, can be viewed online at http://www.ayrton.eu/tube/ and on Vimeo at https://vimeo.com/211642646

Bristol-based, Enlightened, one of the largest event suppliers in the south west of the UK, has recently invested in a stock of Ayrton Perseo Profile IP65-rated fixtures […]

Ayrton Karif shines through for Genesis The Last Domino? tour

It may never rain in southern California but it pays to be prepared because when it does, man, it pours. Full Flood Inc. Lighting Designer Noah Mitz […]

The iconic theatre in Madrid acquires Ayrton’s moving head LED spots to enhance the lighting of its space. The theatre has now eight Spot Ghibli and six […]