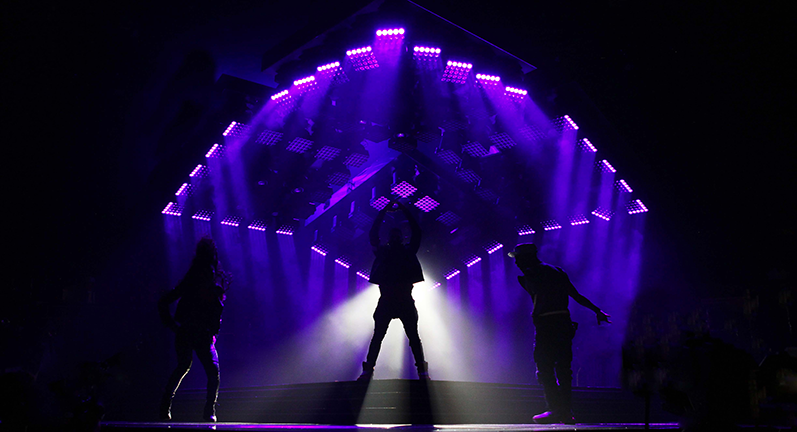 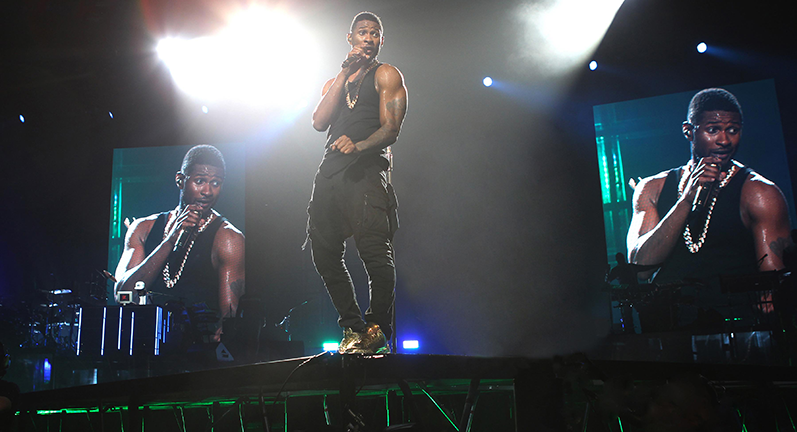 Usher gets RADICAL with Ayrton on the UR Experience Tour

Eric Wade, of FOHShow LLC (www.fohshow.com), is the first US lighting designer to put Ayrton’s RADICAL new MagicPanel™-R out on a major tour – that of American R&B/Hip-Hop artist Usher as he embarks on a fifty-date tour across America and Europe to promote his 8th album, UR.

Wade’s rig includes 64 active MagicPanel-R units in the air, plus 25 Ayrton MagicBlade™-R fixtures under a transparent forestage. Both fixtures are members of Ayrton’s new RADICAL line of LED beam projectors, which was introduced at ProLight + Sound in Frankfurt earlier this year.

The common component of the entire RADICAL line is an individually-controllable, 15W RGBW multi-chip LED source coupled with a 67mm diameter 4.5° collimator optic. MagicPanel-R puts these emitters into a 5 x 5 matrix, while MagicBlade-R mounts them in a unique, seven-in-a-row, in-line configuration. Both fixtures feature a fast moving yoke with continuous, unlimited rotation on the pan and tilt axes.

This is not the first time Wade has used Ayrton lighting products. “I first used Ayrton’s MagicPanel™602 on Maroon 5’s Overexposed European tour in January 2014. During the three-week run the MagicPanel 602 fixtures were the only ones we had absolutely no problems with. We didn’t have to change a single one! I liked them so much I decided to incorporate 64 of the new MagicPanel-R into my design for Usher’s international tour.”

Wade has made MagicPanel-R the main feature of four automated, diamond-shaped lighting ‘pods’, custom-made for the tour, each of which carries sixteen MagicPanel-R units. The pods are suspended above the stage and can be raised, lowered and tilted to any angle above the performers to create different shapes and looks throughout the show.

The stage incorporates a number of lifts that are raised and lowered to deliver performers and create scenic elements. The combined movement of lifts and pods with that of the Ayrton fixtures above and below stage creates a very dynamic show. “At one point – during a breakdown in OMG – the pods are flown in so low as to wrap around Usher in a shape I created as reminiscent of the ‘Beamer’ space ship from Falling Skies (the post-apocalyptic sci-fi television series). Usher dances within the ‘spaceship’ while the MagicPanel-R configuration sprinkles light all around him before all are returned back up to the grid, flattening out as Usher raises his arms to send it away. It makes for a great opening song look!” Cueing of the pods and all automation is handled by assistant lighting designer, Jason Winfree.

The set, designed by the inimitable Baz Halpin and Chris Nyfield, includes an asymmetrical stage with a downstage point offset 6ft from centre. The irregular shape is accentuated by Wade’s use of MagicBlade-R fixtures embedded beneath the stage’s transparent leading edge. Wade has spaced the fixtures at 4ft intervals and uses them to project up through the clear floor and forward, through the clear front, passing through and over the audience, often synchronising with the hand moves of Usher himself, as if he were controlling the lighting sequences with his dance moves.

“I chose to use MagicBlade-R and MagicPanel-R in maximum channel mode,” says Wade. “This meant a lot of programming for my Programmer/Associate Designer, Eric Marchwinski, but also means I can get a lot out of them and a much greater level of control, because the ability to control each and every pixel gives me an unlimited amount of ‘looks’ to build from.”

Wade runs the entire show from a GrandMA2 lighting console. “With Morpheus Lights (Ayrton’s exclusive US distributor) helping ACT Lighting create new libraries for the Ayrton fixtures, controlling them was a dream,” he says. “I used Control Freak Systems and Earlybird Visual to pixel-map all of the MagicPanel units which enables us to send video into them as well. Control Freak Systems is the control backbone of my show while Earlybird Visual did all of the MA 3D files for the Ayrton products to give us beautiful 3D renderings of the fixtures, along with great pre-programming.”

Wade has been very impressed by how dependable and creative the Ayrton products have proved. “MagicPanel-R is just as reliable as MagicPanel 602. It is very similar but has sharper beams, and its 5 x 5 matrix means it uses fewer channels. The configuration of emitters gives MagicPanel-R a centre pixel which gives me additional design options – an ‘X’ has a centre point for example – and I can create different patterns from the ones I can make with MagicPanel 602’s 6 x 6 matrix. They really are great fixtures.

“MagicPanel-R is top of my list of favourite fixtures. I didn’t get the chance to try out its wireless DMX option on this tour, or to use the Ayrton WildBeam™-R which is another from the Radical Series I am keen to try, so now I’m looking forward to putting both into action on a project I have early next year!”