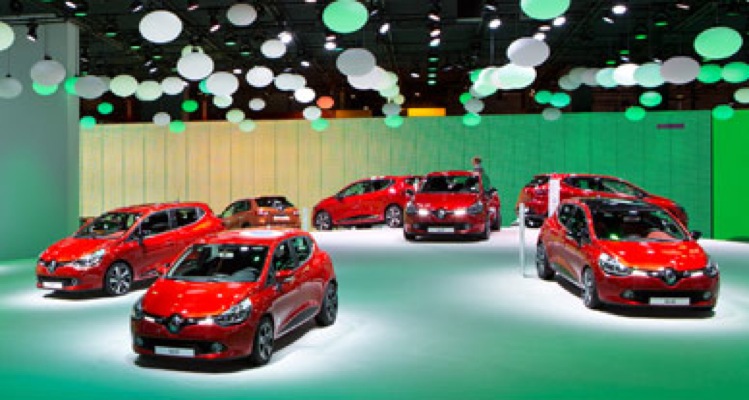 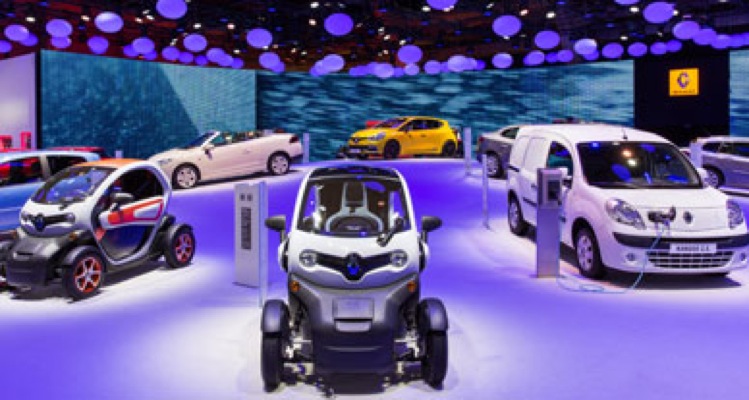 Signature French car manufacturer, Renault, decided a change of image was called for at the 2013 Paris Motor Show with a revolutionary new stand design that would be more representative of the brand as it is today, its new range of cars and its desire to move towards greater energy-efficiency.

Architectural agency DGT chose lighting designer, Hervé Audibert, to design the lighting for their 4,200m2 stand that would surprise visitors and competitors alike. Audibert, traditionally a theatre and museum lighting designer, worked with service provider, New Advanced Technology (NAT), to bring about a stunningly different stand which, at Renault’s stipulation, was lit for the first time using only LED lighting.

Using bold swathes of colour and far lower light levels than is customary at a motor show, the design also introduced movement in the form of a ceiling of 400 illuminated spheres that echoed the contours of the ‘landscaped’ setting, creating a design that was innovative in both appearance and technology.

The result ensured Renault stood out markedly against the dazzling light of its neighbouring stands. “We were the troublemakers who were coming to upset the apple cart for this type of lighting,” says Audibert.

Audibert made it his a mission to redefine how the car is portrayed through his use of light, reducing the intensity and aggression with which it is currently represented and substituting it with an idea of “what (the car) should become in the cities of the future.”

“There is much talk of electric cars on the Renault stand, for example, so we had to find another way to show the vehicle as something other than a powerful phallic symbol,” explains Audibert. “It was important for me to transform the image that people have. Moreover, we were in Paris and Renault, the symbol of France, needed to reign superior and stand out from the crowd as they were creating the event.”

Audibert chose to use 375 Ayrton WildSun K7 fixtures to pick out each car in a cool white halo of light, isolating each from the sea of colour surrounding them. “We needed peak energy points within the coloured ensemble for the overall vision and cohesion of the stand,” he says. Audibert also selected 100 Ayrton Arcaline 2 LED strips to light the walls of the stand with intense colours.

The design then had to meet the stringent requirements of the Renault paintwork design team whom Audibert describes as “very picky about matching the colours of the cars.” Luckily the WildSun K7’s 7000°K white option “suited them perfectly” to give true colour renditions of the cars they illuminated.

The WildSun K7 units operated at 80% power for sixteen hours each day and promise a lifespan of 40,000 to 50,000 hours of constant illumination. “But even if they only provided 25,000 hours, that would be 50 times the lifespan of standard bulbs, so it would be at least 10 years,” says NAT’s external technical consultant, Gérard Schallier.

Schallier was equally impressed with the Ayrton Arcaline 2 LED strips used to colour the walls of the stand: “This is a great product, which makes for really good colour with the rest of the set-up,” he says.

The ceiling of suspended illuminated spheres was to present its own challenges. “The idea was to reproduce an undulating stand by the movement of the balls,” says Audibert. “We softened everything, nothing was to be aggressive.”

“(The ball is) a nice little toy that lights up really well,” continues Schallier. “It is fitted with 8 OSRAM RGBW LEDs without secondary optics since we had to light up the ball diffuser live. With the white LED, you can really qualify the colours and get the right hues.”

However, the balls were required to literally float in the air so the stand designers decreed there should be no cable, necessitating a reliance on WiFi to control their movement.

Ayrton’s Yvan Péard, whom Schallier claims was ‘the most effective and efficient in terms of time’, was called upon to work with Belgian company, Krill, to develop the balls and provide the LED motors. He had to find a DMX RDM solution as the Ayrton WiFi cards he would otherwise have used did not have a display. Unfortunately the DMX substitute proved unreliable so Péard replaced them with a reliable WiFi solution with RDM from Lumen Radio. This has since led to a productive collaboration between the two companies for all future Ayrton products to incorporate Lumen Radio RDM cards.

The final result was a stand that not only looked good but offered the bonus of real energy savings. “The Renault stand had less than half the demand, so we must have used 40% of what was consumed before!” concludes Schallier. “Ecologically speaking, it is really much more in tune with the times.”