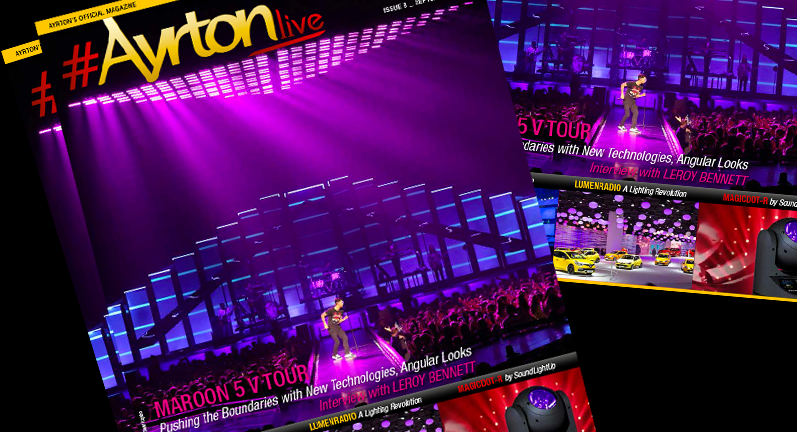 Welcome to the eighth issue of our AyrtonLIVE magazine.

AyrtonLIVE8 features just some of the exciting projects that centre around our latest product releases. Ayrton has launched six new products so far this year: MagicDot™-R, CosmoPix™-R, VersaPix™-RS, DreamPanel™-Shift, DreamPanel™-Twin and WildSun™-K25. Each of these started their global roadshow at Prolight + Sound in April 2015, and continue to PLASA London and LDI Las Vegas, with many smaller tradeshow appearances in between.

Just one year after our MagicBlade™-R burst onto the scene, MagicDot™-R is following the same success curve and, in the short time since its launch, is already touring the world with major artists and bands. MagicDot-R’s arrival prompted immediate, phenomenal response from lighting designers around the world who instantly put them to the superb creative use for which we designed them. You will see that the results have surpassed our expectations:

Take That, Enter Shikari, Dizzy Mizz Lizzy and a collaboration between Fauve and All Access Design in France are some of this year’s live music tours to use MagicDot-R and MagicBlade-R, alongside a performance from Bruno Mars at Rock in Rio; and, of course, we couldn’t ignore the heroism of Foo Fighters’ Dave Grohl who continued on the band’s Sonic Highways tour, despite a broken leg, mounted on an ‘Iron Throne’ surrounded by our MagicDot-R fixtures – we couldn’t be more proud! Many thanks to the imagination and confidence in our products that these LDs have shown.

Maroon 5’s V tour forms a special feature in these pages, with a full report from PLSN, and an exclusive Ayrton interview with lighting and production designer, Leroy Bennett, who can always be guaranteed to come up with ingeniously original uses for our products, with spectacular results.

Television ventures include Germany’s Verstehen Sie Spaße and French reality television show, The Return to an Unknown Land, both of which employed a variety of Ayrton fixtures in their broad-ranging programmes.

This issue’s company profile focuses on those clever people at Lumen Radio, whose innovation in the field of wireless DMX solutions partner so well with Ayrton’s innovation in LED lighting.

Finally, our Bench Test features MagicDot-R and explains the technology behind the magic which has cast its spell over so many lighting designers. We love that you love it! And we hope you enjoy reading this issue of AyrtonLIVE8 as much as we enjoyed putting it together.