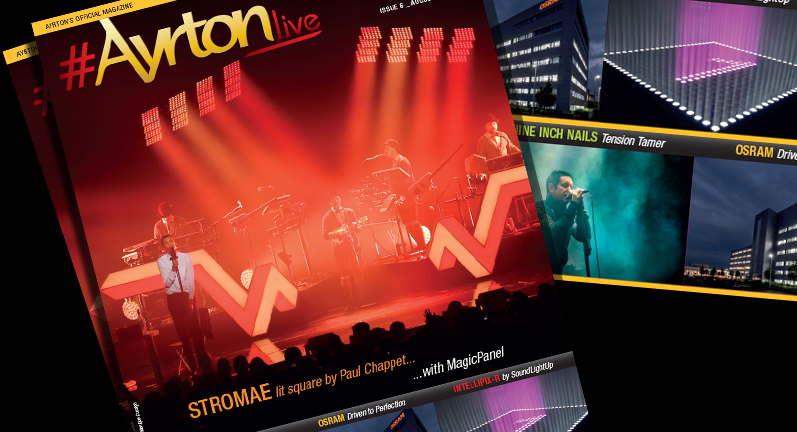 Welcome to AyrtonLIVE6, bringing you the latest news and developments from us here at Ayrton.

Since our last issue when we reported the successful launch of MagicPanel 602, we are delighted to announce it received the 2013 LDI Award for Best Debuting Product of the Year in the Projection category.

Stars of the music world as diverse as French rock star, Bernard Lavilliers, British rock legends, Black Sabbath and American singer-songwriter Bruno Mars have all been lit by MagicPanel 602. No fewer than 220 units – the largest deployment to date – were specified by Bob Barnhart for the SuperBowl half-time show in February. This starred Bruno Mars, who had first performed under a pyramid of the fixtures at the opening of the Cosmopolitan Hotel is Las Vegas at new year. Meanwhile the Netherlands saw in the New Year at the famous EDM Awakenings party where MagicPanel took centre stage behind the DJ booth. You can read all about these and more in the following pages.

Other stage legends currently touring with MagicPanel include Beyoncé, Jay-Z, Metallica, Wiz Khalifa and Stromae. We bring you full reports on Roy Bennett’s extraordinary design for NIN Tension tour from Lighting & Sound America, and on Paul Chappet’s design for the Stromae tour from SoundLightUP.

At Ayrton we like to continually surprise our customers and we succeeded in this by launching the Radical Series at Prolight+Sound in March. Our unsuspecting visitors were delighted, and we were delighted in return by their positive response to our super-sleek, super-efficient new product range. You can read all about the new fixtures on pages 8-10 and throughout the magazine.

The Radical MagicPanel-R has already made an appearance on tour with Belgian rockers, Triggerfinger, received its world television premiere on the children’s song-writing competition, Dein Song and appeared on Germany’s ‘Mother of All Talent Shows’ Linus Talentprobe.

The NandoBeam S6 was also launched at Prolight+Sound as the big brother to NandoBeam S3. This will be followed by the NandoBeam S9 which receives its premiere at PLASA London 2014 next month. More to come on this in the next issue!

Later in AyrtonLIVE6, SoundLightUP brings us some fascinating insights into Osram’s Ostar LED technology which forms such an key part of Ayrton’s innovative designs. Ayrton is proud to work so closely with this intelligent and equally innovative and responsive company.

Finally, our Bench Test for this issue concentrates on the Radical Series IntelliPix-R which SoundLightUP refers to as ‘a link between light and video’, allowing lighting designers a free rein to their imagination and an infinite range of possibilities with their designs.

We hope you enjoy reading this issue and look forward to seeing you at tradeshows around the world.