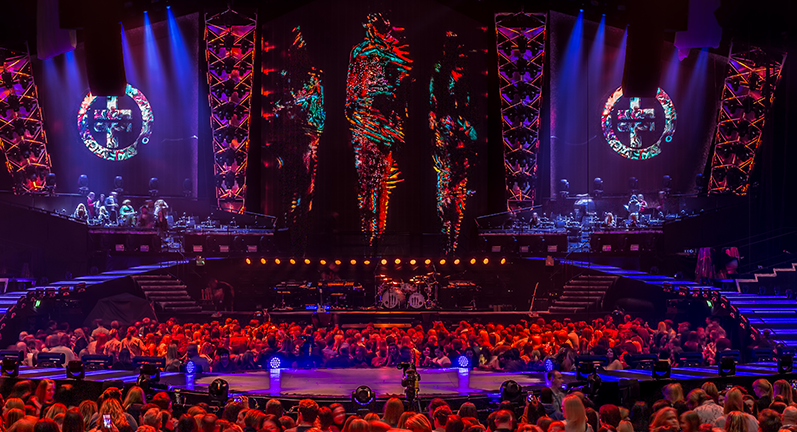 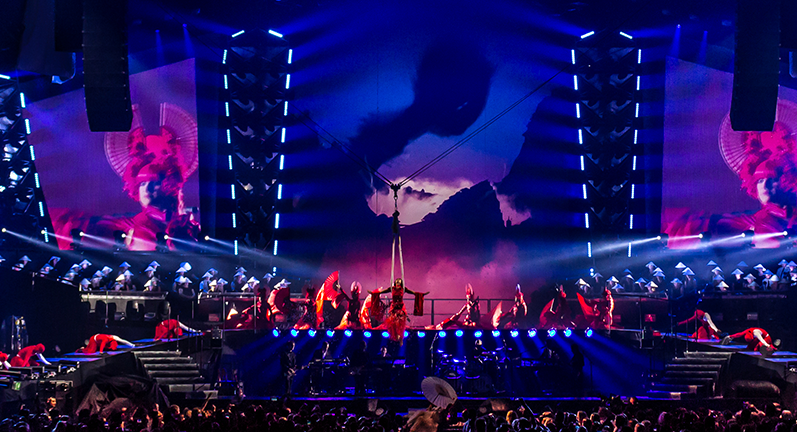 Lighting designer, Tim Routledge, has employed a quantity of Ayrton MagicBlade-R and MagicPanel-R LED fixtures on Take That’s Live 2015 tour, which is currently travelling the UK in promotion of their seventh studio album, III, before crossing to mainland Europe in the autumn.

One hundred and twenty-eight Ayrton MagicBlade-R LED fixtures and fifty-four MagicPanel-R units play a vital role in Routledge’s design where they form an inherent part of the rig, delineating the outlines of production designer Misty Buckley’s creative set design and providing a spectacular and versatile backdrop to the band centre stage.

Creative director, Kim Gavin, devised a show that exhibits a high degree of theatricality with artists performing across a large multi-level main stage that loops right out into the arena. Routledge’s brief was to produce a very theatrical look in keeping with the design but overlaid with a huge ‘pop punch’. ‘The MagicBlades certainly gave me this,” he says. MagicBlade-R is a unique linear fixture which presents seven individually controllable 15W RGBW LED emitters in-line with a tight 4.5° beam and continuous double rotation on the pan and tilt axes. These combine to pack a powerful punch and some unique design possibilities.

Routledge outlined the outer edges of four bespoke scenic pylons – which act as upstage lighting trusses – with a total of 80 MagicBlade-R fixtures. At the top of the show these throb into ‘life’, supposedly powered up by a performer on a bicycle. From then on in they are used heavily in many numbers, for example, the anthemic Get Ready for It, where the MagicBlade-R units move in unison in dramatic tumbling rotation. “I also used the MagicBlades to emphasise middle eight drop in certain numbers and created night sky sparkles and shooting stars on Rule the World to replicate the content on the central video screen,” says Routledge.

A further 60 MagicBlade-R units are rigged around the inside edge of the undulating runway which loops out into the audience like a rollercoaster track. Routledge uses the MagicBlade-R fixtures like a light curtain, running travelling chases along them to add movement and enhance the impression of travel along this epic sized set.

Routledge first spotted the MagicBlade™-R fixtures at PLASA 2014 where, he says, their continuous pan and tilt capability set them ahead of anything else. “I trialled them on the Jonathan Ross show in November and again on Take That’s promo show. They fitted the bill perfectly. They look so different from anything else and really have that ‘wow’ factor.

“I find the MagicBlade-R produces very interesting effects and really gives something new,” he continues. “The design possibilities they bring mean they have real longevity as a lighting tool. They are superbly reliable – for the kind of thing they do and the amount of work we put them through, it is amazing we have never had any problems with them!”

Forming a illuminated backdrop to the centre stage area are 54 MagicPanel™-R fixtures. MagicPanel-R is a panel of twenty-five 15W LED RGBW sources arranged in a 5 x 5 matrix, which also exhibits the continual pan and tilt capability for which Ayrton is renowned. Routledge positioned these behind the band in a curved wall, 3 units high by 18 wide, and mounted on the front of nine box lifts. These are used both as lighting fixtures and to run video content, where they act as audience blinders and provide interesting backdrops and undulating effects behind the band.

“I wanted to map video across the MagicPanel-R units to, for example, replicate the jellyfish content during Said It All from the video wall onto the LED emitters of the MagicPanel-Rs, and run the same video content across them all. I was able to achieve this quickly and easily using the GrandMA 2 running new VPU software. This made it really easy to use the MagicPanels as both lighting and video fixtures.

“The Ayrton MagicPanel-R and MagicBlade-R units were a very big deal for us because they were so new, but Ambersphere really got behind us with this and worked closely with Neg Earth on supplying and supporting this huge rig.”