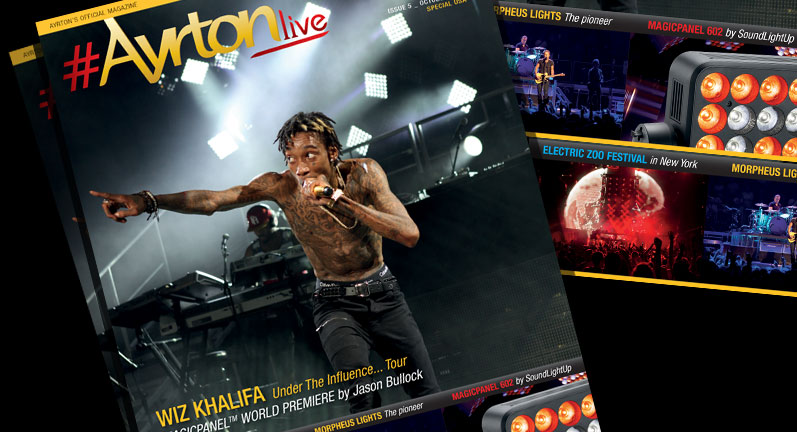 Welcome to AyrtonLIVE5 bringing you the latest news and developments from Ayrton.

Who could have predicted the speed with which MagicPanel has, well, worked its magic on the live music industry since its launch at Prolight + Sound in March?

The LED matrix fixture has proved a huge and immediate hit with its unique combination of configuration, output and features, not least of which is the continuous rotation which has fascinated lighting designers and audiences alike!

MagicPanel has been instantly adopted by lighting designers and staging companies worldwide who have put them to work on a wide variety of spectacular, high profile events. We concentrate on some of the US events for you in AyrtonLIVE5:

First to use MagicPanel in the US was lighting designer Benoit Richard who employed 36 MagicPanel units as a backdrop to Kelly Clarkson as she sang the opening number for the National Football League’s weekly television show.

MagicPanel’s appearance was also televised during the opening ceremony of the US Open Tennis Championship where LD Bryan Barancik flanked Lenny Kravitz and his band with six banks of the dazzling units.

In complete contrast, LeRoy Bennett employed the largest number of MagicPanel units to date on the Nine Inch Nails tour when he placed 126 MagicPanel fixtures into 14 overhead pods forming a major component of the show as both illuminators and in creating signature effects.

MagicPanel’s career has been well and truly launched! Watch out for more reports in future issues of AyrtonLIVE.

New product launches for this issue include Intellipix 25, a modular beam projection panel which clips together to form a semi-transparent wall or floor; WildBeam 152, an LED moving head with a 5° beam and an incredible 90% efficiency; and NandoBeam 602, the big brother to the NandoBeam 302 launched at Prolight + Sound in March and aimed at concert stages and television studios. All three of these products are to receive their world premiere at LDI in November. You can read about them here.

This issue’s company profile focuses on Morpheus Lights, pioneers of automated lighting and long-time US distributors of Ayrton products. We think you will agree the history of the company is fascinating and serves as an example of why our company philosophies match so well.

Lastly, our Bench Test could be nothing other than MagicPanel of course! This is your change to delve into its inner workings and gain an insight into just how the magic happens…