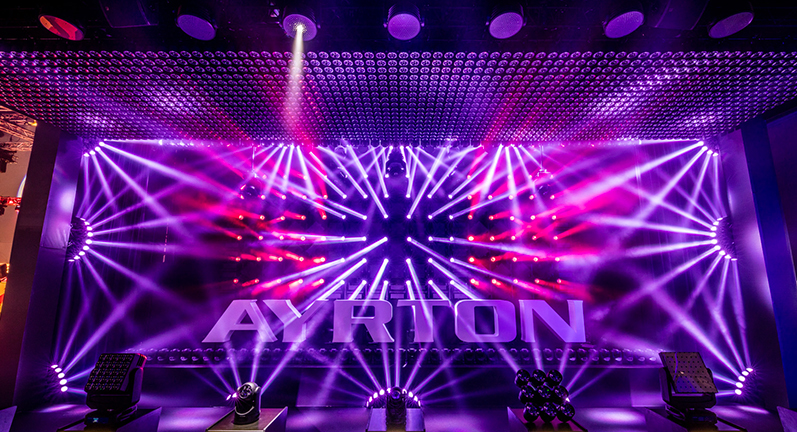 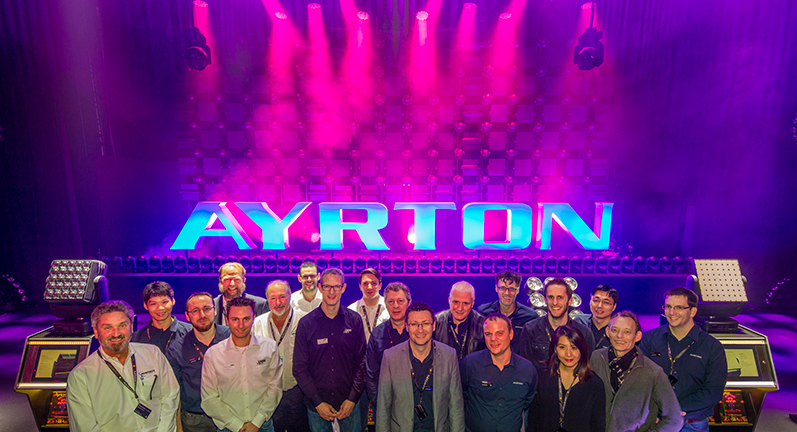 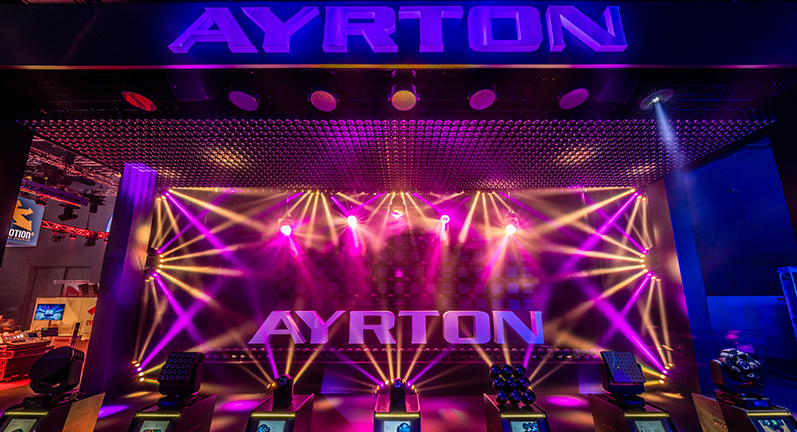 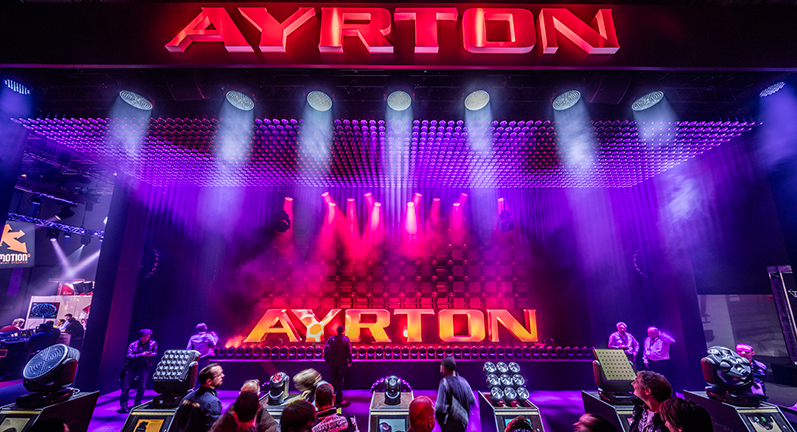 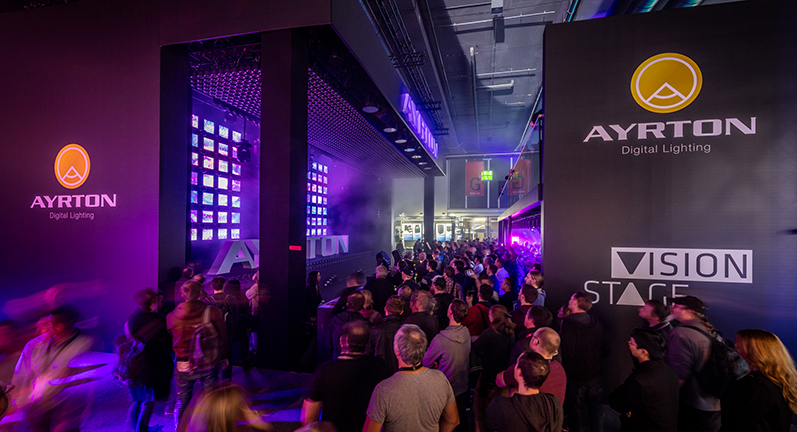 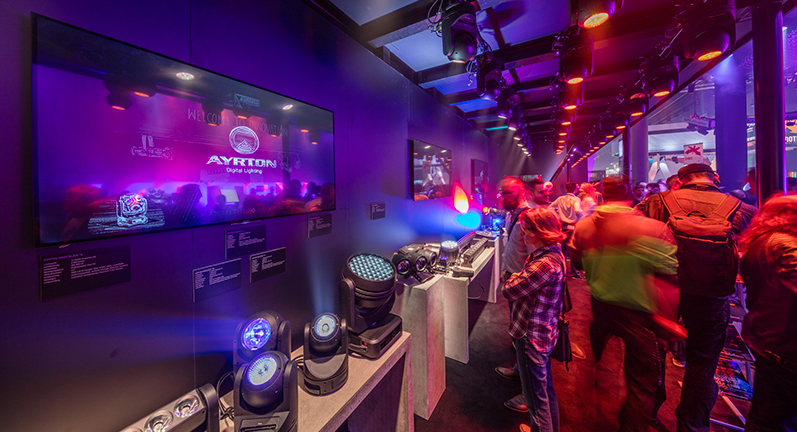 Ayrton presented a number of new products at Prolight + Sound, Frankfurt, exhibiting with its German distributor, Vision Stage, on a ‘double-decker’ stand where this year’s new creations were shown to spectacular effect in a dazzling light show. Designed by Stéphane Migné, the show, featured over 650 fixtures in a 128sqm display, and culminated in a surprise ending which wowed the crowds who came to see the new creations in action. There were plenty of new ideas from these masters of innovation, with no less than nine new products launched.

Yvan Péard, Ayrton’s visionary Chief Design and Technology Officer, delivered an array of innovations which have enlarged the scope of several of the Ayrton ranges: the largest and most efficient optics on the market have been incorporated into the XT range to provide an optimised version designed for large-scale venues; the SX range marks the start of a new series that introduces a zoom capacity to the options available in Ayrton’s product line; and the MagicDot™ family has been extended to incorporate fixtures to suit all sizes of venue. Ayrton continued to surprise visitors with more totally new innovations, including the world’s first laser-source automated profile, a MagicPanel™ fixture with square optics, and the world’s only motorised strobe.

Here’s a run-down of the newest Ayrton fixtures to hit the market:

DreamSpot™-18K – the world’s first profile with a laser source
Unique in appearance and performance, DreamSpot-18K is the world’s first automated, multifunctional, multiple-purpose luminaire with a laser-source. Fitted with an Osram™ Laser Phaser™ P6000 phosphor conversion module, DreamSpot-18K is capable of both beam and spot projection and offers an astonishing 18,000 lumen output, in a uniform beam with no hot spots, plus continuous pan and tilt capability.

DreamSpot-18K’s zoom is composed of a 13-element optical system that provides a range of 2° to 34° in Beam mode and 6° to 54° in Spot mode. The monochrome laser emitter is colour calibrated at 5,600°K negating the need for relamping due to colour variations. DreamSpot-18K offers a CMY subtractive colour mixing system and a wheel of 13 standard colours that includes four levels of CTO correction. Effects include fixed and rotating gobos, an iris, a dynamic effects wheel, rotating prisms, and diffusion filters.

Lighting designers all over the world have been anticipating Ayrton’s first profile fixture, expecting it to be a unique entry into the LED-based genre. The DreamSpot-18K has well and truly surpassed these expectations!

IntelliPix™-XT – Ayrton slims it down to 2°
IntelliPix™-XT is a versatile luminaire fitted with nine ultra-powerful, low-profile, RGBW multichip LED emitters, arrayed in a 3×3 matrix, that produce a fantastic parallel shaft of light – intense, sharp and incredibly coherent – over a long throw distance. Each emitter can be controlled individually and is coupled with Ayrton’s new proprietary 126 mm diameter optics – the biggest and most efficient on the market – which push the limits to deliver a 2° full beam with a record-breaking centre-beam luminous intensity of 580 candelas per lumen. The combination of emitter and 126mm optics with a next-generation power supply unit results in over 95% efficiency, ensuring the fixture can run continuously at full power without any loss of performance.

A highly adjustable yoke system enables the luminaire to be used individually to generate complex assembled shapes or, with a highly precise coupling accessory, multiple fixtures can be perfectly positioned to create large-dimension 3D volumetric lighting effects in motion.

MagicDot™-XT – far reaching power
MagicDot™-XT is an amplified version of the MagicDot™-R with the same minimalist design, a similar circular footprint, and all the features, but with a much more powerful punch to suit long throw applications. Like IntelliPix™-XT, MagicDot™-XT is equipped with the new Ayrton proprietary 126 mm diameter collimator that distinguishes the ‘XT’ product line. Weighing in at 550g, this new high-efficiency lens is the world’s largest collimator which, when coupled with an ultra-powerful RGBW emitter, enables MagicDot™-XT to project a 2° beam with centre beam efficiency of 580 candelas per lumen. This output makes it perfect for larger venues. MagicDot™-XT’s ultra-tight, fat beam is impressive over distances and can generate the sharpest of light curtain effects.

MagicDot™-SX – The 8:1 Zoom-Dot
The compact MagicDot™-SX is a hybrid version of MagicDot™-R, with the added features of a zoom capability and Lumen Radio wireless connectivity. The newly developed 8:1 optical zoom has a fixed transmitting lens, no visible moving parts and a incredible zoom range of 5° to 40°. The short stroke of the zoom system permits MagicDot™-SX to switch from intense Beam mode to sweeping Wash mode virtually instantaneously, which offers exciting new possibilities for stage and event lighting.

MagicDot™-SX has the identical physical dimensions and transmitting lens diameter as its MagicDot-R cousin and is capable of the same ultra-quick infinite rotation, which makes it the most compact washlight and fastest zoom moving head on the market. MagicDot™-SX delivers up to 75% optical efficiency in a tight beam, when the 94 mm diameter collimator is positioned close to the transmitting lens.
All this ensures great compatibility and graphical interactivity between MagicDot™-SX and MagicDot™-R which can be used in combination to create incredible new visual compositions.

MagicBlade™-SX – Pure power and versatility
MagicBlade™-SX is a variant of the successful, award-winning MagicBlade™-R with the option of a zoom function. An ultra-powerful, five-in-a-row batten, the versatile MagicBlade™-SX features individually controllable, RGBW high-output LED emitters, a state-of-the-art, short-stroke zoom with a 10:1 ratio giving a wide zoom range of 4° to 40°, smooth movement, and continuous, infinite pan and tilt rotation. The zoom has no visible moving parts and is fronted by a 94mm diameter fixed frontal lens – the same as MagicDot™-SX – to generate five fat beams that can be zoomed to increase the visual impact while creating volumetric effects.

The fastest moving, low profile, zoom wash batten, MagicBlade™-SX is ideal as a shaped wash light for lighting musicians on stage, or for use as footlights to create washes on the audience or artist.

A library of pre-programmed dynamic effects, stored in fixture memory, can be combined with different display modes and colour macros.

A revolutionary new optical zoom system with no visible moving parts outside the unit, is formed of a proprietary system with a 15:1 zoom ratio producing a zoom range of 3.5° to 52°. The unit is capable of projecting everything from tight shafts of light to a wide wash, making it ideal for pixelmapping, as a powerful special effects projector, and as a wash light.

MagicPanel™-FX zoom optics can project a solid beam that initially appear round, but then squares off as it separates into a stunning patchwork of colours. At its widest spread, the smooth field of this elegant and highly original luminaire projects as fully round. With the same dimensions as the DreamPanel family, MagicPanel™-FX has multiplied creative potential of these amazingly original families of fixtures.

MagicBurst™ – Ayrton’s spinning 240,000 lumen strobe
MagicBurst™ is the industry’s first high-power graphic LED strobe with continuous, unlimited, rotation on pan and tilt – and the first strobe unit to be produced by Ayrton.
A 384 x 384 mm squared face supports 3,840 high-output white LEDs grouped into 64 pixels on an 8 x 8 matrix. With a new, state-of-the-art, ultra-compact 1,300 Watt power supply, MagicBurst™ can deliver peak light output of over 240,000 lumens – perfectly calibrated at 5600K – for several seconds, and put them into continuous rotation.

The strobe duration, speed and intensity of each LED pixel group can be individually controlled, and individual sections controlled to create graphic arrays, moving checker-boards, flashing letters, etc. There is also a library of fixed images and pre-programmed dynamic effects.

With a minimalist design and reduced visual footprint, MagicBurst™ is similar in panel / head dimensions to the MagicPanel™-FX and DreamPanel™ product family, which allows the creation of giant graphic arrays with units of the same size. The standardized format of this luminaire therefore allows it to be combined in arrays with Ayrton’s MagicPanel™-FX, or Imaging Display units, like DreamPanel™ Shift and DreamPanel™ Twin, for breathtaking results.

A proprietary, silicone-based, high-output 6:1 optical zoom ensures perfect colour stability over time, with a zoom range of 10° to 60° and six, independently controllable, segments of 36 LEDs.

Its four-colour mixing is based on an ingenious arrangement of emitters combined with a holographic filter on the output, which optimises the colour mix and protects the fixture under extreme conditions, for example, the dust and sand in multisport venues. The transmitting lens is equipped with an integrated honeycomb ‘egg crate’ louvre to prevent unwanted off-axis glare.

Wildsun-S25 is the most powerful RGBW fixture on the market and ideal for spreading magnificent pastels, saturated colours and sheer power over the long throw distances of concert halls, stadiums and festivals.

AlienPix™-RS – Eight continuous rotation axes and six extraordinary beams
AlienPix™-RS is a unique, conceptual, multi-rotational fixture that combines a multiplicity of effects within a single luminaire. Inspired by fixtures from the ‘70s and ‘80s, AlienPix-RS is a reinterpretation using modern technology, optics and LED sources. A tight, 3.5° RGBW LED central emitter, with a centre-beam luminous intensity of over 180 candelas per lumen, is surrounded by five more individually controllable beams, each of which can tilt continuously as the main saucer pans, tilts and rotates in any direction. In total AlienPix-RS can simultaneously perform up to eight multidirectional continuous rotations.
The main disk of this compact luminaire has a diameter of less than 40 cm, but the combinations of movement and colour are immeasurable!

The raft of new products launched at the show, and the volume of visitors who continually crowded the stand for the four days, confirm the established reputation of Ayrton as a company known for developing only original and innovative products. Ayrton continues to strive to be on the cutting edge of technological innovation – in optics, electronics, mechanics, and heat dissipation – and, this year, Ayrton’s R&D team has excelled itself in pushing the boundaries of imagination. Ayrton’s new fixtures mark a breakthrough in the history of the company, which once again has introduced completely new concepts, from scratch, in order to surprised its clients and visitors to the show.

‘It has been fabulous to exhibit with Vision Stage, in one of Ayrton’s most active and successful markets, and to hear the reactions of our distributors and customers to the new products,” says Ayrton’s International Sales Manager, Valère Huart. “The stand was full and busy – on both levels – for the four days of the show, with customers eager to take the new products, and their capabilities, back to their home markets. It is Ayrton’s mission to present new technology, ideas and inspiration for lighting designers and it is very satisfying to see the enthusiasm with which the latest products have been received. We are very happy with the result.”

Video footage of the Prolight + Sound booth show can be seen online here and a conversation with lighting designer Stéphane Migné, who is responsible for designing most of Ayrton’s famous demo videos alongside programmer, Arnaud Pierrel, can be read or downloaded in the latest issue of AyrtonLIVE magazine at www.ayrton.eu