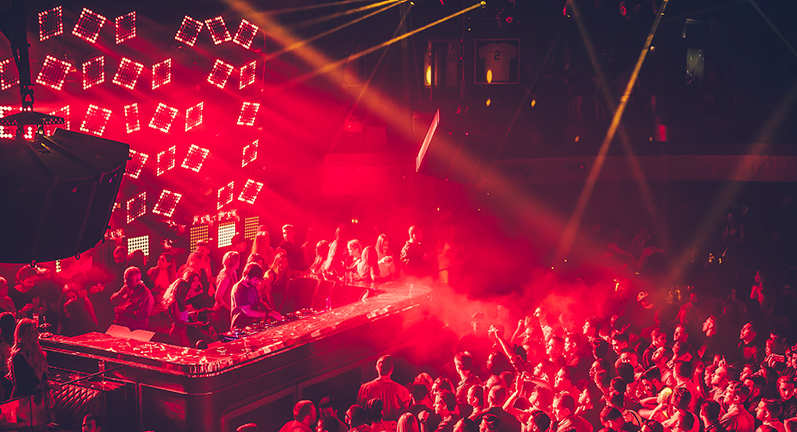 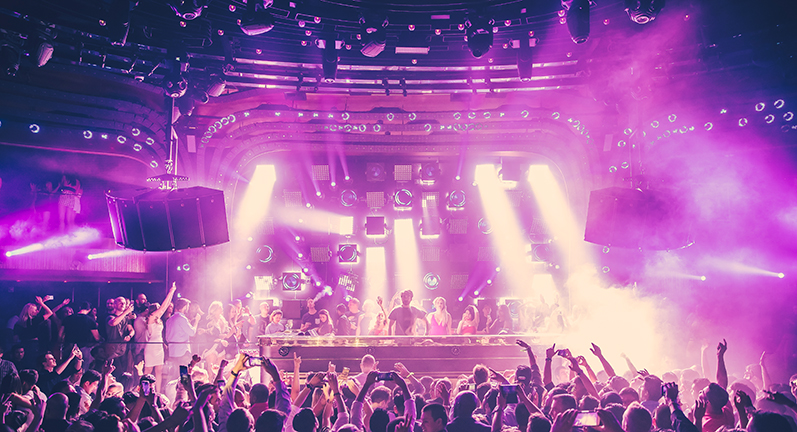 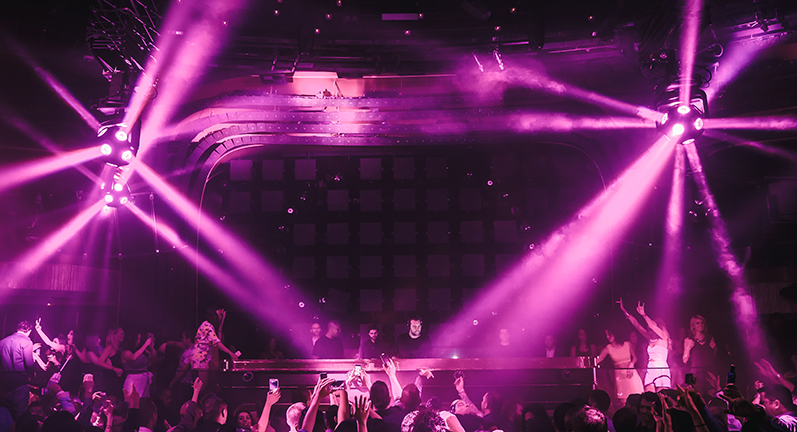 Hakkasan Group’s JEWEL nightclub, which opened in May 2016 at Las Vegas’ prestigious Aria Resort & Casino, has provided a major new playground for Ayrton lighting fixtures. Along with Ayrton MagicDot™-R and CosmoPix™-R fixtures, JEWEL is also one of the first installations to use Ayrton’s new DreamPanel™-Twin.

Based in one of Las Vegas’ newest and most elite hotels, JEWEL is the latest of Hakkasan Group’s clubs. Built to replace the existing HAZE nightclub – which, opening in 2009, was in need of bringing into the 21st century – JEWEL has been designed to re-attract guests from among the hotel’s elite resident clientele and across Vegas.

The design intent behind JEWEL was to create an environment that gives guests a completely new, eye-opening experience, with visual effects that had never been seen before. Audiotek led the consultant-driven design with lighting and video conceived and specified by Frank Murray and Chris Kmiec, who worked in close collaboration with Hakkasan Group’s Video Director, Ed Shaw and Lighting Designer, Andy Taylor. It was installed by local integrators, NTA under the project management of Nevin Edwards.

JEWEL is the third nightclub project for Audiotek with Hakkasan Group, having previously designed the Hakkasan at MGM Grand and OMNIA at Caesar’s Palace. Audiotek was determined to create something completely different for JEWEL that would continue to reflect Hakkasan Group’s reputation for opulence and quality and meet the high expectations of Aria’s top-end clientele.

Audiotek’s project manager, Chris Kmiec, takes up the story: “Our aim was to create a venue with enough ‘wow’ factor to draw guests back, and become known as a spectacle to be seen, as well as a place to be seen in. Every big nightclub now has a flat LED screen behind the DJ…we wanted a departure from this now-standard feature, and were looking to give JEWEL something exciting and original which would make it stand out from the many attractions Vegas offers.”

It was while looking for this special ingredient that Kmiec and Murray discovered Ayrton’s new DreamPanel™-Twin at Prolight & Sound in Frankfurt in 2015 and realised this dynamic panel was the ideal solution with which to create a truly unique design.

With a modified MagicPanel™ of 64 LED emitters on one face, and a high resolution DreamPanel™ video screen on the other, DreamPanel-Twin combines video and lighting capabilities into one fixture, with the added with capacity of the continuous pan and tilt movement that is a feature of Ayrton fixtures.

This enabled Kmiec and Murray to devise a totally new concept of a kinetic feature wall behind the DJ booth which would be the focal point at the centre of the club’s design. Composed of 54 DreamPanel-Twin units in a 9-wide by 6-tall array, the wall could not only act as a surface for video content, but also make use of DreamPanel-Twin’s LED matrix side to run effects, act as low resolution video surface and even backlight the DJ – none of which would be possible with a standard video wall. Add to this the ability to alternate between the DreamPanel-Twin’s two sides, and with the exciting addition of continuous dynamic movement, and Kmiec and Murray had found the format that would give JEWEL its signature look, in a similar way to the moving chandelier at OMNIA.

Kmiec and his colleagues at Audiotek were familiar with Ayrton and its products, having used Ayrton MagicPanel™-R and MagicBlade™-R lighting fixtures as key components in their design for OMNIA in March 2015.

“From experience, we knew how reliable Ayrton fixtures were, yet how original their design concepts are,” says Kmiec, “so although it was a risk to place completely new fixtures at the centre of a project design – we were amongst the first to specify and use DreamPanel-Twin – it was a calculated risk that we believed worth taking! Plus we had the added assurance of Keith Bennett of Morpheus Lights (Ayrton’s exclusive US distributor) at our back – we have always enjoyed great support and a great relationship with the company – so we were confident to go ahead.”

Custom video content, created specifically for the shape and size of the DreamPanel-Twin wall, and designed to run on both video and LED matrix surfaces, was provided by production company, Ne1co, in conjunction with Hakkasan Group’s Video Director, Ed Shaw.

Shaw worked closely with Audiotek lighting designer, Andy Taylor to produce an 8-hour long show that combines lighting and video into one stunning production. “Andy and Ed worked in a uniquely collaborative way, in a situation which is traditionally quite alien to lighting and video designers, because both designers were using the same fixture,” says Kmiec. “They were able to take turns to drive the design from either the lighting or the video perspective using a Luminex DMX merge and Ai media server to take control of the lighting or video content as it played out on both sides of the moving fixtures. Avolites also made us some customised control software to move the DreamPanel-Twin in response to the video generated content.”

MagicDot™-R uses a 60W RGBW multichip LED with new, high-efficiency 94mm optics and a single optical collimator to deliver an intense 4.5° beam and a palette of rich saturated and pastel colours. It has a totally round head which fits within the diameter of its cylindrical base in all positions and smooth, lighting fast movement in both continuous pan and tilt rotations. “We chose the MagicDot-Rs because of their speed, small size and sharply defined beam,” says Kmiec, “and because they produce effects which are superior to any other product”.

Sixteen more MagicDot-R units are mounted around the balcony edge to add to the midair effects and work in conjunction with the overhead rig, not the least of which is 6 Ayrton CosmoPix™-R fixtures suspended from the ceiling. CosmoPix-R is based on the concept of the famous PAR36 double-rotation spheres that date back to the early ‘80s, which Ayrton has revamped using totally new technology. CosmoPix-R uses 12 of Ayrton’s 94mm optics – the same as those used in MagicDot-R – and generates 12 shafts of coloured light that can be separately controlled in all directions and driven in continuous pan and tilt rotation.

JEWEL’s CosmoPix-R units are employed as the major feature of the central lighting rig and reaffirm the concept of dynamic movement which has become signature to the Hakkasan brand. The CosmoPix-R are mounted on DMX-controlled Desisti pantographs and dropped in and out of the ceiling above the heads of the crowd to create interest at different levels.

“Dropping the CosmoPix balls down from the centre of the ceiling instead of rigging them in fixed overhead positions or against the wall allows us to make full use of the feature set of the fixtures,” explains Kmiec. “They can be viewed from all angles and perform at full 360° in all directions, shedding beams of light above, below and to the side of them. We are able to maximise their spin feature and use multiple lights simultaneously to incredible effect. Then, when they are not in use, we can simple retract them back up into the ceiling so as not to obscure sightlines. The result is a multiplicity of new, exhilarating effects with many different layers to view.”

It was these unique qualities of the Ayrton fixtures which caused Audiotek to chose them as JEWEL’s feature lighting. “Ayrton designs products that are ‘out there’, and in this case ‘disco’, and they give us effects we can’t achieve with anything else,” says Kmiec. “When Ayrton designs fixtures, no-one says ‘stop’ to an idea – they just go ahead and make it work.”

Audiotek Managing Director, Frank Murray, agrees: “Their products are easy to work with and great tools for the creative designer because they call for careful thought at the design stage. With something as multi-faceted as DreamPanel-Twin and CosmoPix-R, you have to give some thought to what you want to achieve before you program it; yet they can be programmed to be simple for the operator and in-house technicians to use, even after the designers have left the building.”

The programming of JEWEL’s high-octane show was carried out by Audiotek’s Andy Taylor who directed Ayrton’s Arnaud Pierrel, – the man responsible for the stunning programming of Ayrton’s famous demo videos – and Avolites console officianado, Tim Hornung. The result is an 8-hour show full of content and movement operated by Jorge Tellez, JEWEL’s in-house lighting operator.

“We are very happy with the way the Ayrton fixtures turned out,” says Kmiec. “By investing in a product newly released by the manufacturer, we have achieved what we set out to do, that is provide the elite customers of Las Vegas with something new and really different – a spectacle to be seen, as well a spectacular club to be seen in. The DreamPanel-Twin and MagicDot-R wall, backed up by the extendable CosmoPix-R fixtures differentiate JEWEL from any other club in town, and it is succeeding in attracting VIP clients to this prestigious venue as a must-see attraction. It has set social media sites alight with Facebook, Twitter and Instagram alive with images and videos of the DreamPanel-Twins in action.”