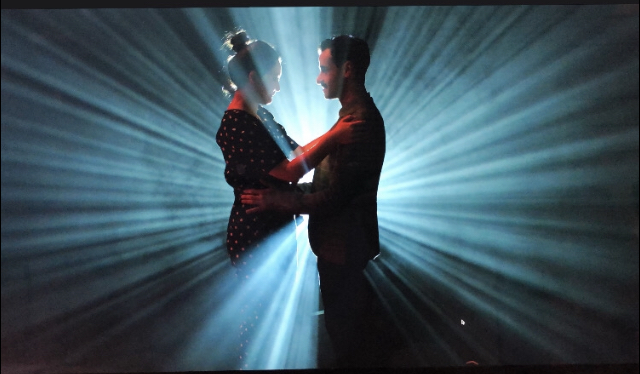 Riksteatern, the Swedish National Touring Theatre, was due to take its production of Love Songs on a three month tour of Sweden from early March, with lighting director and designer, Jörgen ‘Hajen’ Haimanas, choosing 6 Ayrton Diablo LED profile luminaires as a major feature of his lighting design, in what would be Diablo’s first national tour of Sweden. Due to the current COVID-19 crisis, the tour was only able to complete the first five dates before it was necessarily postponed by lockdown.

Love Songs is described as a ‘sentimental love bomb’, an evening full of great emotions and powerful music depicting love in all its forms. Featuring the musical talents of Arja Saijonmaa, Frida Beckman, Lisa Hu Yu, Robert Hannouch and Peter Järn, the production is directed by Maja Salomonsson, with set and costume design by Johanna Mårtensson, and sound design by Stefan Johansson. Into this mix Haimanas brought his considerable lighting talents, creating an incredible array of looks using the six strategically placed Diablo units in a design crafted to cope with the many sizes and types of venue they would visit on the tour.

“As the National Touring Theatre of Sweden, Riksteatern makes a point of bringing top quality dance and theatre productions to a multitude of unconventional venues, – rural community centres, gymnasiums, town halls, activity centres, rock clubs and other spaces – as well as traditional theatres, to reach as diverse an audience country-wide as possible,” says Haimanas. “This necessarily entails playing several venues which are not conventional theatres and therefore not equipped to the usual standards and specifications of a theatre.

“Under these circumstances, a fixture’s weight, zoom range and power consumption become even more vital where trussing might not be heavy duty, and available height can be restricted. So I needed a profile fixture that was compact, lightweight, super-flexible and full of features that could handle the many smaller and varied venues on the tour.”

Haimanas admits he was first attracted to Diablo by its name: “It called to me! I looked up the technical specifications and it sounded perfect for our work as a touring company: small, light-weight, powerful and small enough to fit four units into a single flightcase – all very important considerations on tour. Then Ayrton’s Linnea Ljungmark brought one for us to test out and I was stunned – it had a good dimming curve and an excellent zoom range – just what I was looking for. I got my wish!”

Diablo is a versatile, feature-rich LED profile luminaire, based on the ultra-compact format of Ayrton’s Mistral spot fixture. Delivering a 19,000 lumen output from its 300W LED source, Diablo is the smallest, lightest, and most efficient luminaire of its category. (https://www.ayrton.eu/produit/diablo/)

The six Diablo were the only profile fixtures in Haimanas’ rig – a decision made to ensure a uniformity of look from every profile – and were supplied by Stage and EventLight of Stockholm.

Four Diablo were rigged overhead and another two mounted at stage level, upstage of the bold, red central set piece. “The dominating set feature is a large scarlet ‘frame’ which is finished in a shiny red surface,” explains Haimanas. “This was quite a challenge to light without bounce, but the Diablo has an extremely flat field with no hotspots which was a great help in lighting the face of the set – and also providing beautiful lighting for the faces of the actors. I also used Diablo’s gobo feature to texture the light across the stage, create mid-air effects that broke out into the audience, and add dramatic backlighting on stage from the two ground-level Diablos.”

Haimanas chose to restrict his colour palette, preferring instead to play with the bold colours of the set using a combination of Diablo’s high output, metallic white (7000K) light and haze: “The things you can do with smoke and white light is amazing! It’s a matter of good angles and timing. I wanted to create almost a cartoon-like effect with hard backlight from one Diablo on each performer, and played with the effect of stretching long shadows across the stage.”

“Jorgen was able to create so many different atmospheres and looks for each and every song throughout the show,” says Ljungmark who saw the performance at Riksteatern’s home venue in Stockholm. “It was fabulous to see how super-creative he could be with just six Diablo units, and illustrates just how versatile Diablo is. Shows don’t have to be big-scale to create a big impression, and Ayrton has fixtures to suit all sizes of venue.”

Haimanas is familiar with Ayrton products having first used MagicPanel-R in 2018 on the heavy metal musical, Ont Blod (Bad Blood), written by Rasmus Lindgren with music by Mikael Jepson and Jens Andersson of Swedish band, The Ark.

“Ayrton has always specialised in LED lighting and one of the reasons we looked at Diablo was, of course, its LED source,” says Haimanas. “The environmental benefits are obvious, like its low power consumption and reduced transportation requirements (4 per case). But LED is the way sources are going – and will have to go – and the fact that Ayrton has created such good LED fixtures certainly helps the transition away from conventional source fixtures.

“I like the features and colours of Diablo and it was very easy to program on our console. For our touring purposes, Diablo’s ability to zoom out wide to cover the whole stage and simultaneously cope with the lower trim heights of some venues, as well the distances involved in a conventional theatre, was invaluable. Every venue is different on a nightly basis – so Diablo’s versatility is a great touring feature.

“But it is the size and weight, with no loss of features or output, that is the most fantastic thing about Diablo. It is much easier to plan ahead with the varying tour venues when you know weight is not an issue. I am very, very happy with our new Diablos and I can’t wait to try them out later as we travel from the far north of Sweden to the south. The units will have to deal with temperatures that range from 10°C to -40°C – so it is going to be fun to wake them up and see how they react!

“It is such a shame to see the remainder of the tour unfulfilled but we look forward to resuming in safer times and continuing to bring the work of this much-valued touring company to audiences all over Sweden.”