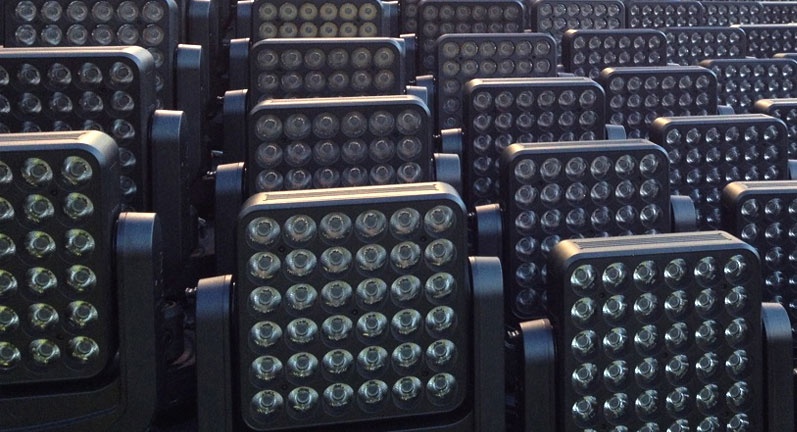 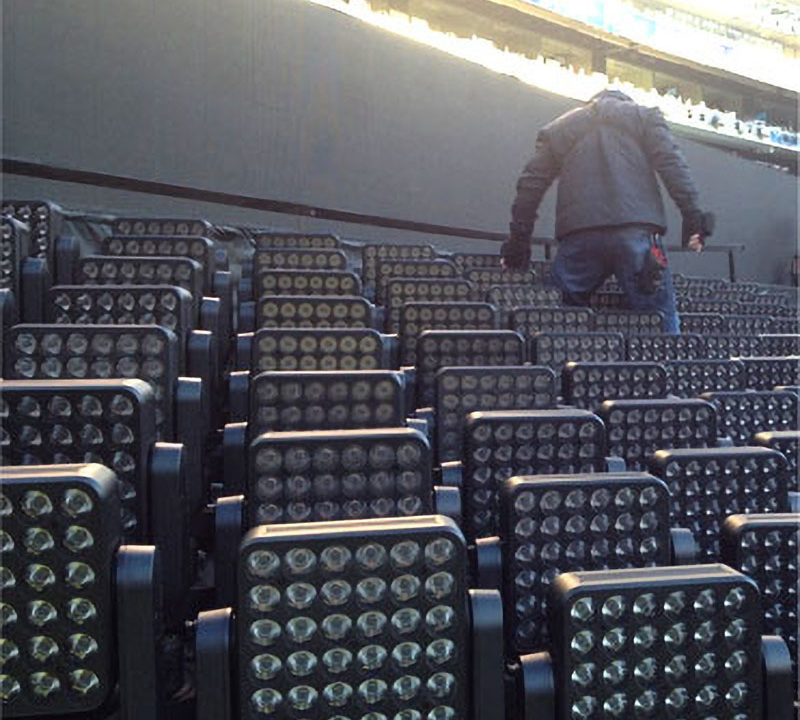 Bruno Mars and the Red Hot Chili Peppers were given a dazzling backdrop to their performances at the Super Bowl XLVIII Half Time show at the MetLife Stadium, New Jersey, on 2 February by Bob Barnhart’s spectacular lighting.

Barnhart, of Full Flood, Inc., worked in conjunction with Bruno Mars’ Lighting Designer, LeRoy Bennett, of Seven Design Works LLC, to incorporate 220 Ayrton MagicPanel™602 fixtures into a design that enhanced the vibrancy and dynamism of the performances on stage. Bennett had previously used the fixtures to great effect on Nine Inch Nails’ 2013 « Tension » tour and presented the concept of using the large number of them to Barnhart during the early stages of the Super Bowl design process.

Ayrton MagicPanel™602, which was awarded the 2013 LDI Award for Best Debuting Product in the Projection category, is a moving head LED beam projector equipped with thirty-six 15W Osram RGBW emitters in a 6 x 6 array.  Each emitter projects a tight, powerful 7.5° beam and can be controlled individually or used collectively to produce a collimated 14,000 lumen shaft of light.  Under individual control, the emitters can be pixel mapped or driven by video via Art-Net or Kling-Net. To supplement the graphic possibilities this control provides, MagicPanel™602 can be continuously rotated on both pan and tilt axes, which adds a dynamic dimensional effect to beams individually projected by mapped emitters.  MagicPanel is obviously also controllable via DMX-512 and is RDM compatible.

The MagicPanel fixtures were arrayed in two massive, raked banks which flanked the performance area and served to extend the visual impact of the stage within the massive 82,500-seat stadium. The MagicPanel banks were arranged in two ‘chevron’ shapes which were mounted on custom-made risers that rose from 4” at the front of the stage to 11” at the back with each row staggered to sit 6” (15cm) higher than the one in front.

At Mars’ request, the show was to replicate an atmosphere as close to a live rock concert as possible, a factor which helped determine the high-octane style of Barnhart’s design. The MagicPanel banks gave Barnhart a blank canvas which he could use to amaze the audience or integrate with the rest of the lighting – possibilities which he used to the full by employing MagicPanel as both a lighting fixture and a projector through which to run video content.

Throughout the show MagicPanel ran the gamut of appearances: a subtle of a sea of golden light, which echoed the gold jackets of Mars and his band, accompanied ‘Treasure’ as the MagicPanel units turned slowly and independently with random sparkle patterns radiating from each independently controlled LED emitter. This gave way to the drama of red blocks of light blasting at full power into the sky with the arrival of the Red Hot Chili Peppers on stage for ‘Give it Away’.

“I think at some point in the 13-minute show, everything the MagicPanel could do, they did!” says Barnhart. “We also ran video through them in addition to using them like lighting instruments.” The video content, such as a simulated fire effect, which ran through the MagicPanel units, was simultaneously fed out to the LED videoscreen backdrop, forestage and even the hats of the audience for an all-encompassing look.

The MagicPanel units were controlled by a PRG V676 console operated by lighting director, Peter Radice. “I had control of the continuous pan and tilt, and could also over-ride the video feed with colour,” says Radice, who did not use any of MagicPanel’s on-board effects, but rather treated each panel as a « pixel » when writing colour chases. “Jason Rudolph fed the MagicPanel units video via a GrandMA2 and Hippotizer media servers. There were several times when I would over-ride the video to run colour chases through them, or use them to bump to accent the music.”

Super Bowl XLVIII was the first Super Bowl to be played outdoors in cold weather, but despite their IP20 rating, the MagicPanel fixtures were able to cope with the harsh conditions. “The potential for severe weather was all the challenge we needed,” says Barnhart. “We covered the MagicPanels when we were not working with them but they did seem to hold up ok.”

Following his experience with the MagicPanel units on the Super Bowl half-time show, Barnhart agrees that he would choose them again: “The continuous 360° rotation and the intensity of the MagicPanel gives it a unique place in lighting right now,” he says.