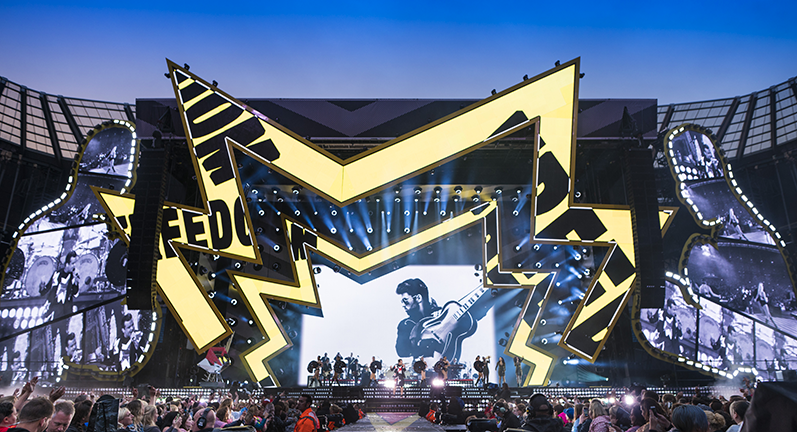 Robbie Williams’ latest European tour took in all points east and west of the continent throughout the summer, culminating in two shows in the Russian cities of St Petersburg and Moscow in early September.  Touring in support of Williams’ 11th studio album, The Heavy Entertainment Show, the production reflected the nature of both the artist and the album, mixing full-on schmaltz with in-your-face entertainment in an atmosphere that was cheeky, loud and proud to be brash.

In a design set to dazzle in keeping with the effervescent star, lighting designer, Mark Cunniffe, opted to use 200 Ayrton IntelliPix™XT LED matrix fixtures to line the front edges of the stage, which was – what else – star-shaped.  “One of the major challenges of a stadium show is that 50%-60% of the show is played in daylight, before transitioning into night-time later on,” said Cunniffe. “The further north in Europe, the longer the sun lingers, so it is important that we have a visual show for that first portion of the show, as well as beyond into full darkness.”
“Whether it was lighting-based or screen-based, I wanted something that would work in daylight and was looking for a punchy pixel-based source that provided REALLY serious impact – which IntelliPix™XT does in spades!”

“I wanted there to be no separation between the staging and the lighting. By rigging IntelliPix™XT on the front of the band risers, the main stage and the star shaped forestage, I could clearly delineate the three stage levels and tie in the overall look and feel of the show.”

The IntelliPix™XT is a development on from the original IntelliPix™R delivering six times greater efficiency from its nine independently-controlled RGBW multi-chip high-power LEDs which emit narrow 2° beams from their 126mm diameter optics. These are configured in a three by three matrix, with a pixel pitch of 175mm, each of which can be aligned precisely to form highly complex assemblies that deliver large-dimension 3D volumetric lighting effects. An efficiency rating in excess of 95% of its PSU enables IntelliPix™XT to run continuously at full power without any loss of performance.

Cunniffe had not used the IntelliPix™XT before so his choice reflected a good deal of faith in the Ayrton brand, “I was looking for a really bright parallel beam to accent and clearly define the star-shaped stage edge; it is clearly an important visual indicator of the show’s character.
“Other LED sources were considered but were far more wash-orientated making that sharp clarity difficult to achieve, whereas the IntelliPix™XT is much more of a beam light and provided the necessary ‘punctuation’, especially in a stadium-size show which requires a lot of LED. They did a great job!”

It wasn’t only the brightness and clarity that impressed Cunniffe as he explained:
“I particularly like the pixel mapping facility of the IntelliPix™XT. The beauty of the feature is that you have nine separate cells to map which, multiplied by 200 units, gives you an awful lot of pixels to play with – eighteen hundred in all. When pixel-mapping them it is easy to match them into other products. I run a lot of video content through them but can pixel map many other effects too.”

As part of such a vibrant stage and light show, the IntelliPix™XT more than proved their mettle and Cunniffe was enthusiastic about their performance: “The IntelliPix™XT are a signature unit of the show and are used on nearly half of the twenty-song list. In between, I run them at 20% as stage trim to delineate the edges of the star-shaped stage.  I’ve been really impressed with the fixtures, their output, the pixel mapping and their flexibility.  I wouldn’t hesitate to use them again.”