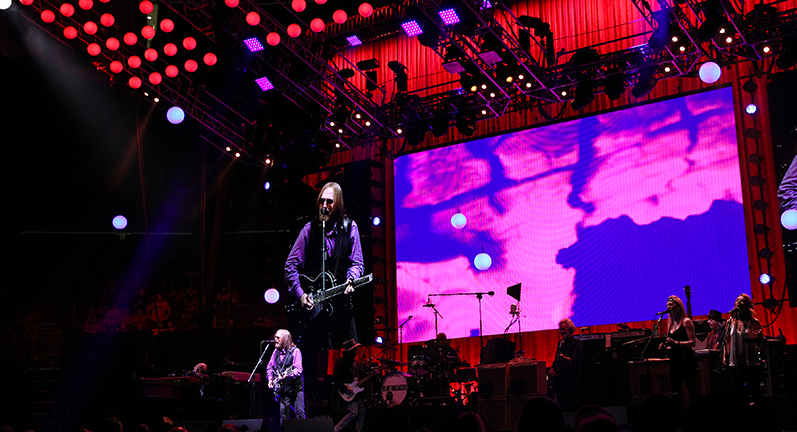 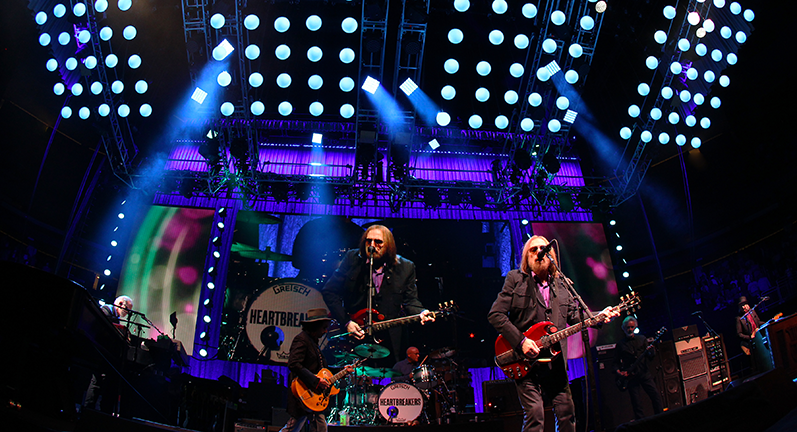 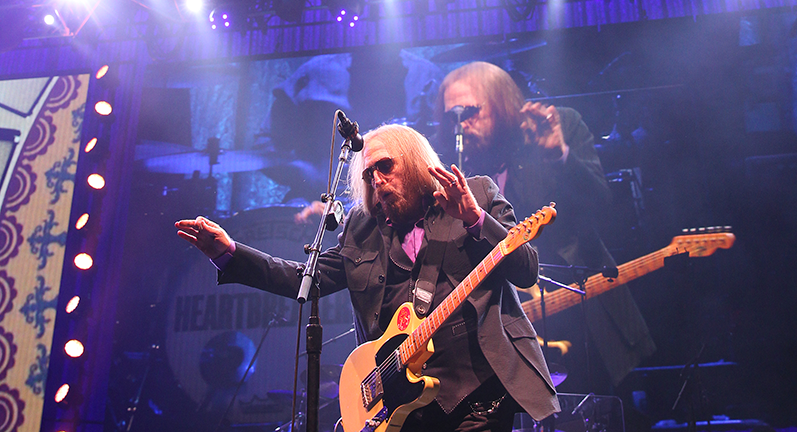 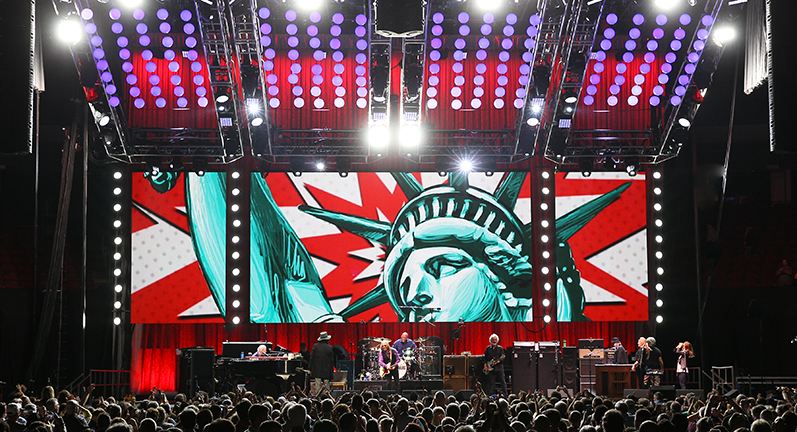 New Ayrton fixtures for Tom Petty and the Heartbreakers 40th Anniversary Tour A modern twist on some old favourites.

Classic American blues rock band Tom Petty and the Heartbreakers celebrates its fortieth anniversary and thirteen studio albums with their current 5 month (53-date) tour of the US and Canada, with an additional date in London in July.

The band’s long-term lighting designer and director, Stanley A Green, who has worked with Petty since 2001 in various roles, chose Ayrton LED fixtures as the backbone of his lighting design. He is one of the first to use the new MagicPanel-FX™ and MagicBlade-FX™ units, which he incorporates alongside Ayrton’s MagicBurst™ and MagicDot-R™ fixtures to form a palette of rich colours and variety of looks and textures that reflect the musical diversity evident in the band’s long history.

“I first experienced Ayrton’s MagicPanel™602s when acting as LD for John Legend a few years ago,” Green says. “I wanted to use them again so I used both MagicBlade™-R and MagicPanel™-R on Tom Petty’s Mudcrutch tour in 2016.  When Mark Fetto at Morpheus Lights told me about the new ‘FX’ versions, I went and took a look right away…and I knew I had to have them for my next tour.  The zoom and extra brightness makes them incredibly versatile fixtures.”

Green chose to use 12 MagicBlade-FX units rigged on the downstage of each overhead rectangular truss for audience washes, effects and a nice rich, even wash on the band, and also at downstage left and right positions from where he uses them as low sidelight on Petty.

Fourteen MagicPanel-FX fixtures are ‘sprinkled’ throughout the overhead rig and used as main high sidelights for Petty, and as backlights for the whole stage.   “I use them as a theatrical lighting instrument and I rarely use them as an effect,” says Green. “I love the thick beam I get with them. At times I use them like truss spots to follow Mike Campbell during some of his solos, and the continuous tilt and pan is a great way to do ‘big ending’ looks for songs.

“At one point I recreate the band’s rehearsal space on stage using only the MagicPanel-FX, widened way out in a nice CTO. It’s a theatrical backlight but it reproduces the warm work-light feel of the rehearsal space. They really are a great, versatile fixture.”

Forty MagicDot-R fixtures act as ‘perfect’ as truss warmers: “In this case actually truss border warmers,” confirms Green, “as well as basic accent fixtures located everywhere in the rig and have proved very useful in completing and filling out a lot of the looks.”

Green introduced 14 MagicBurst LED strobe fixtures to replace all the tour’s old strobe fixtures and audience blinders, and took advantage of MagicBurst’s graphic capabilities to create effects he had never used for the band. The MagicBurst units have proved themselves irreplaceable in the complete line up of Ayrton fixtures for several reasons:

“It is important to Tom to bring the crowd in,” explains Green. “He likes to see the entire audience, especially in the farthest possible seats, and the people back in the 270° area. With the MagicBurst I can have a full pulse strobe at one moment, and the next minute give him a huge, bright, solid wash of the ENTIRE audience for as long as Tom wants.

“During ‘Forgotten Man’, a newer song with a really cool guitar effect here and there, I was able to create the visual version of that sound perfectly using MagicBurst’s 68 individual cells in each unit, with an individual delay time on each one. A fast, bright, random checker-board strobe on all fourteen of them is a big moment…add the fixture’s continuous tilt-spin and it’s huge!”

For the stadium dates, Green augments the inventory with an addition 40 MagicBlade-R units and 20 massive MagicRing™-R9. “We chose these because the stadiums are huge and, not only does Tom once again need to reach every corner of the venue, but we also need to fill the space and give the cameras a reference as to the size and the location.”

Green is happy with his choice of fixtures for Petty’s largest tour yet: “As a designer I’m always looking for new ways to do an old job…lighting an event, focusing the audience’s attention, enhancing the audience’s experience. And the nice wide beam plus the new zoom from both the MagicPanel-FX and the MagicBlade-FX really give a look you can’t achieve with any other fixture.

“As always with Ayrton, the units are built right, with plenty of control protocol choices. They have succeeded in keeping the traditional value of a strong lighting instrument crossed with a modern edge and extreme usability.

“For years, I’ve been trying to make this tour 100% LED as Tom gets really hot on stage, so a conversion to LED helps a lot.  There are many LED products out there, but Ayrton fixtures really are the best. They are versatile and easy to program, and the build-quality makes them truly road worthy fixtures.  These are real lighting instruments.”