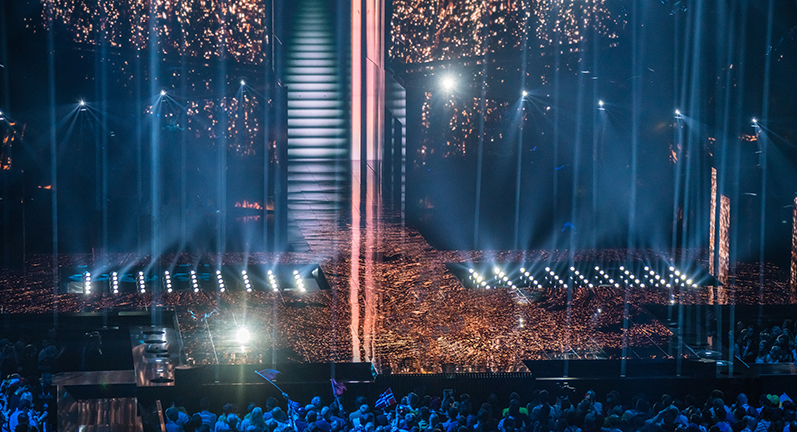 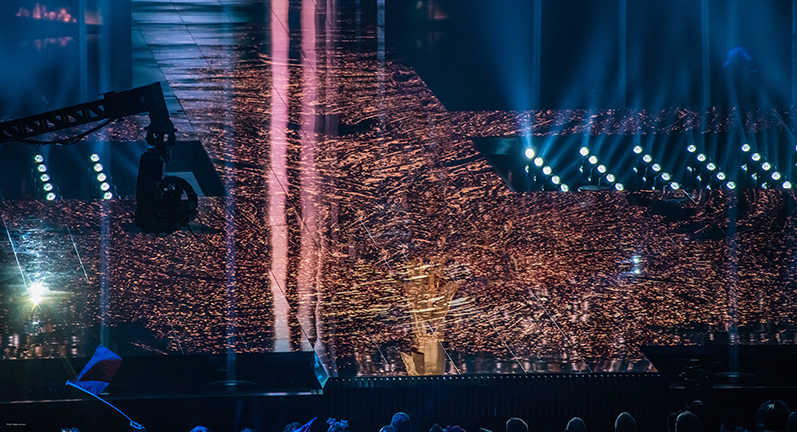 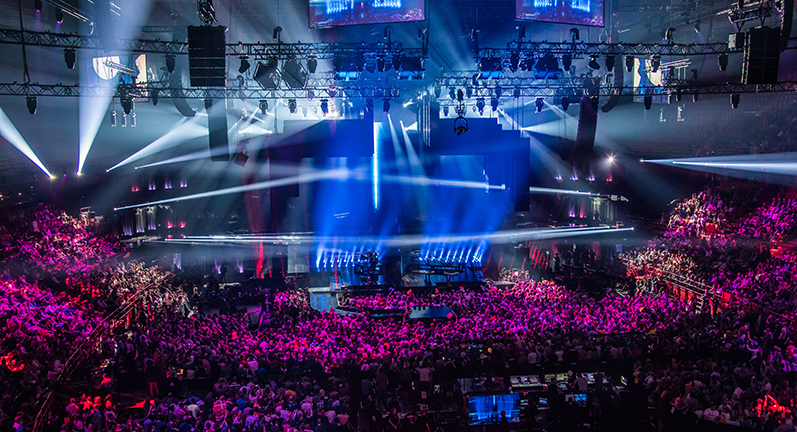 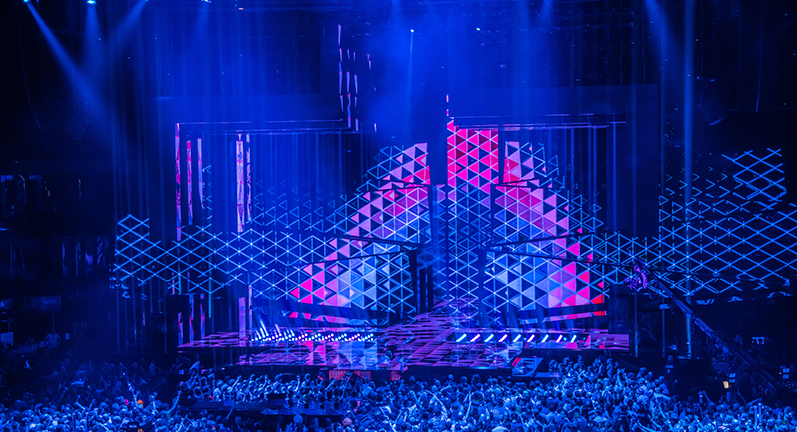 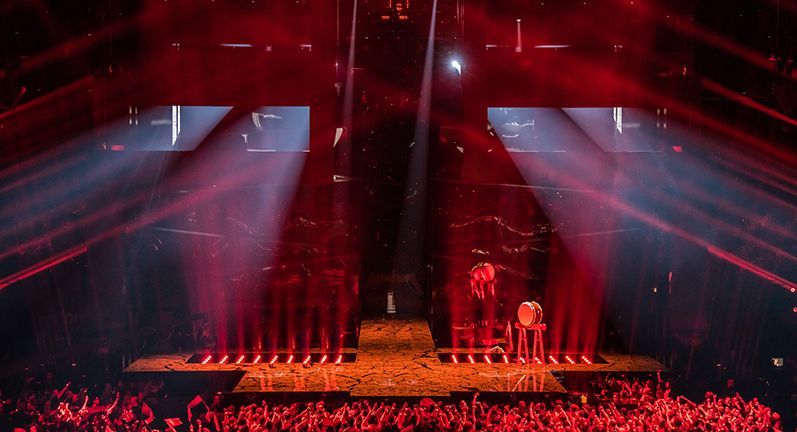 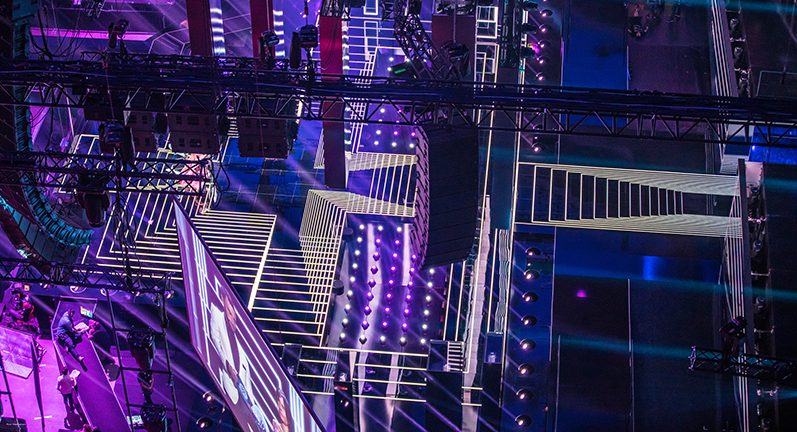 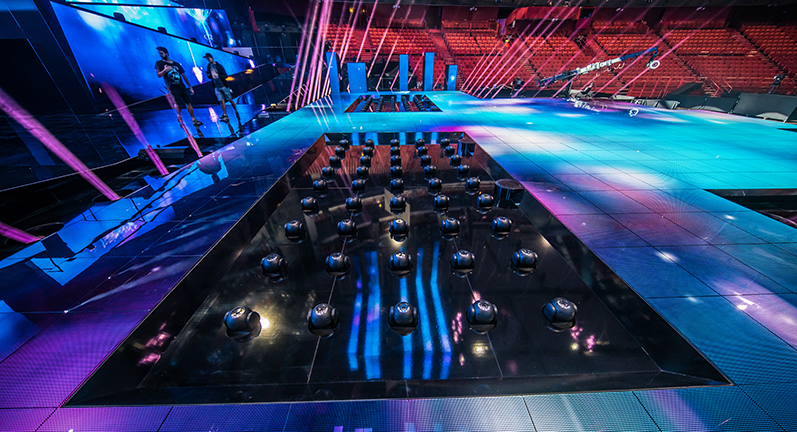 The 2016 European Song Contest provided lighting designer, Fredrik Jönsson of Eyebrow Designs, Sweden, the opportunity he’d been waiting for: to specify and deploy Ayrton’s MagicDot™-R fixtures. A total of 90 units were used throughout the contest, rigged in a highly unusual fashion in a horizontal grid formation and sunken into the centre of the stage.

“I’d had my eyes on the MagicDot-R for some time,” says Jönsson, “and when Eurovision’s set designers, who wanted a lot of lights at stage level, asked me about integrating a small aesthetically-appealing moving light into the stage floor, I immediately suggested the MagicDot-R and they loved the look of it. We arrayed them in two ‘pools’ sunken into the stage and they looked really cool – we called them our ‘robot army’! The first draft was for 400 units, but we scaled down to 90 since we needed more floorspace to facilitate the artists…!”

Jönsson’s intention was to provide this year’s Eurovision Song Contest with lighting that was reminiscent of the traditional old rock and roll tours, using multiple layers to add dimension and space and give an impression of a much larger stage for the television cameras. “By using the MagicDots in this position, I was able to create another, more ‘analogue’ layer of visual information in the very LED-heavy environment,” says Jönsson. “If one is to use a huge amount of LED surfaces on television, it is important to integrate the lighting into them to achieve proper depth for the cameras which seldom understand the depth of a flat LED wall.”

Girts Putelis of lighting suppliers, Litecom, who purchased the Ayrton units through Danish distributor, Atendi A/S, set up the product shootout for Jönsson to make his final choices. “Jönsson liked the MagicDot-R fixtures so much he was determined to keep them in his design, despite changing many other products after the shootout,” Putelis stated.

Jönsson cites the MagicDot-R’s size and output as the main reason for their being the obvious choice for the Eurovision lighting set. The fixtures had to be bright enough to hold their own amid the LED-heavy set, yet be versatile enough to give Jönsson what he needed in the vast range of musical acts that make up the Contest. From their trenches in the stage, the MagicDot-R fixtures delivered straight lines of powerful, punchy light which Jönsson used to create ‘lighting cages’ to surround the artists, or ‘lighting pools’ on the stage shooting visual light beams into the surrounding LED environment.

Jönsson reveals something of the range of effects the units enabled him to create: “In some songs, the MagicDots created nice soft-ish beams of light behind the artist. We also deployed glass bridges over the pools of MagicDots for one song where we used them as a ‘light forest’ that surrounded the artist and dancer who were on the glass floor above them. The MagicDots were also bitmapped in to the video content that was visible in the LED floor during other songs.”

And they proved themselves very hardy on stage too: whilst still in the programming stages, the MagicDot-R army was covered by a portable floor to make a bigger performance area for a large number of dancers performing in one act. “Some of the MagicDots were knocked out of place by the covering panels, but they didn’t break,” says Jönsson. “We just reset them and they were up and running again. They are very robust in their construction!”

Litecom’s Putelis was very impressed by the reliability of the Ayrton fixtures: “The MagicDot-R units behaved perfectly from the moment we received them from the factory, and we encountered no errors or problems throughout the whole six weeks of the Eurovision production and shows. We were very happy with them and confident they can provide our customers with the reliability and performance they expect and need.”

Jönsson concludes, “I really like the MagicDots. As I said, I’ve had a sweet spot for them for some time and took the first opportunity to add them to my designs, and I’m looking forward to trying the new unit with zoom. Ayrton create great fixtures and I really like the new stuff coming out of R&D. I’m looking forward to trying them all as soon as the right projects come along.”