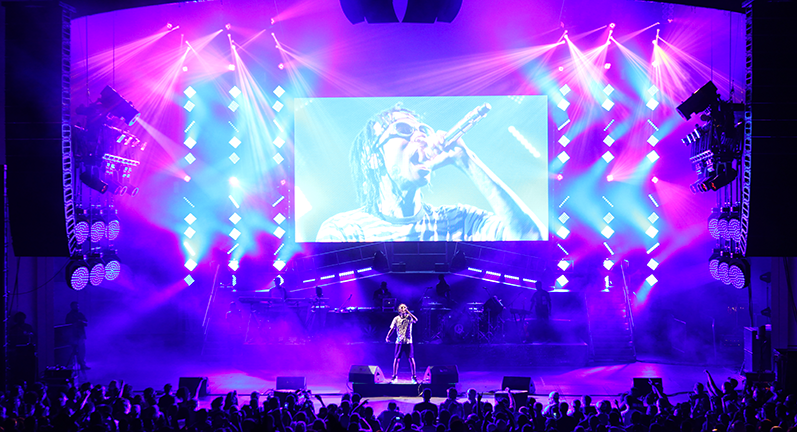 Bullock was amongst the first to use Ayrton’s MagicPanel™ 602 last year and has returned to it this year incorporating 48 of the units in his design. To these he has added fresh offerings from Ayrton’s newly released Radical™ Series, employing 36 unique MagicBlade™-R linear fixtures and 12 massive MagicRing™-R9 fixtures.

Bullock, like Khalifa, is determined to expand the visual presentation of the tours using the latest technology to explore the unique design possibilities that new products present.

“After the success of the MagicPanel 602, I met with Ayrton in Europe and discussed some logical extensions of the technology they had assembled,” says Bullock. “The Radical (-R) series has incorporated some of the ideas we discussed so we spent most of our budget on the new MagicBlade-R and MagicRing-R9 units. Luckily Upstaging, Inc, who supplied this tour, already has a large stock of MagicPanel 602 now that everyone wants to use them!”

The MagicPanel 602 units – each a 6×6 matrix of 15W LED RGBW modules fitted with high-output 7° 45mm optics – were rigged on the back wall and side trusses to form the signature feature of Bullock’s geometric design.

The MagicRing-R9 fixtures were mounted either side of the stage and used both for illumination and for effects. MagicRing-R9 has sixty-one 4.5° 15W RGBW LED sources arranged on a 60cm diameter face, and can be operated in various modes using from 18 to 256 channels.

Bullock chose the 256 channel mode, although there are multiple macros on offer to control colour, chase etc. “Once you configure it for full resolution mode the channel count starts to add up, so it takes a little extra time to figure out how you’re going to use them and assess how to configure your console,” he says. “However, with 2 fixtures per universe you start understand the vast number of parameters at your fingertips.”

Bullock had another function in mind for the MagicBlade-R – unique fixtures with seven 4.5° 15W RGBW LED emitters arranged in-line and continuous pan and tilt capabilities – mounting eighteen on the rear wall, eight outlining the top ramp and four more set into side trusses. “It’s very easy to create asymmetry with the MagicBlade units,” he noted in an interview with PLSN. “They lend themselves to the weird avant-garde stuff and, because the light is incredibly fast, it can do incredibly cool things like flips and pans and fly-ins with this big flat beam of light.”

“Ayrton’s whole Radical series is forging a new direction,” he says. “Early generations of LED moving heads were lacking definition. You could bitmap the face for cool designs but not project the effect in a beam. Ayrton’s lights are the perfect combination of a beam projector and effect light, and bright enough to beat out most hard-edged fixtures. The -R series has condensed each pixel down to 4.5 degrees which allow fixtures like the MagicRIng-R9 to become, in essence, a large beam projector with the output power of a large format fixture, but at a fraction of the weight and cabling need.”

In terms of tour-worthiness, Bullock is full of praise for the Ayrton fixtures: “The Ayrton kit has been fantastic on the road,” he says. “They’ve been rained on, dropped, plugged in wrongly – and they just keep working! Unless someone has physically broken the body, these lights WORK.