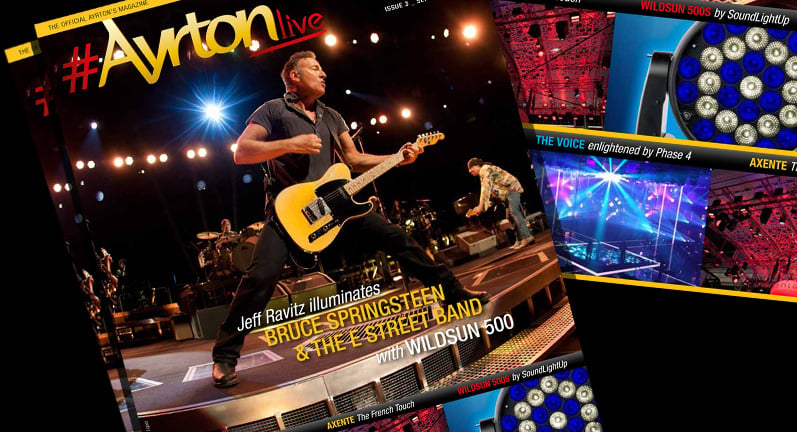 2012 has been a great year for AYRTON, who has seen many of its projectors successfully used in the biggest world events.

The WILDSUN 500 C has been selected by MORPHEUS LIGHT, AYRTON’s US partner, to illuminate the tour of « The Boss » Bruce Springsteen and his E-Street band.

Lit by Jeff Ravitz, the Wrecking Ball tour stops in France at the Palais Omnisports de Paris Bercy, and introduces the French public to a real U.S. show with the audience surrounding the stage, in communion with the artist.

Jeff installed no fewer than 50 WILDSUN 500 C moving heads (20 more for stadiums) that are used on 95% of the ambiances of the concert. He confesses to be a fan of this projector, to which he was introduced by MORPHEUS for its warm white LED, the richness of its colours and the quality of the beam, which is very wide and maintains a significant light output.

Todd Ricci, lighting director, explains the choice of AYRTON projectors, motivated by their quality white, which fits perfectly into an efficient 3200 K light kit, as well as their design and colorimetry. He finally found a way out of the « pizza effect » of LED Washes with the Ayrton RGBW 4-in-1.

WILDSUN 500 Cs also feature in the lighting of Ringo Starr and his 13th All Star Band during his U.S. summer tour.

In Europe, in addition to numerous concerts, the WILDSUN can also be found on TV on the set of the famous talent show THE VOICE, whose lighting design is provided by Frédéric Dorieux.

His supplier, the company Phase 4, has, in fact, strengthened its ranks with 60 WILDSUN 500 Cs, selected after a rigorous test procedure, which compared it to competing LED moving heads on the market. They meet a real demand from television cinematographers looking for exemplary colorimetry, saturated colours and stylish design.

The youngest, the WILDSUN 500 K series, equipped with white LEDs, begins a successful career by joining the warehouse of the company NAT, who invested in 375 of the cool white 7000K K7 version of the successful moving head with unmatched flux.

The emphasis in this issue is on the French company AXENTE. This ideal distributor has 35 brands in its catalogue, combining audio, light and structure. A team of 33 people run this well-oiled  machine, with at its head, Jérôme Brehard, who quickly realised that the future of lighting was in LEDs and the importance of core values ​​such as optimum service to its customers and total confidence in its suppliers. With AYRTON, AXENTE seems firmly anchored in quality and technology.

Finally how can we not present in product testing, the famous WILDSUN 500 S.

S for Stage, which is a version that can therefore be adapted to the stage. It is an RGBW with a narrow 8°/40° zoom and a cold white 6700K to create lively beams, following in the footsteps of its talented big sister, the WILDSUN 500 C.