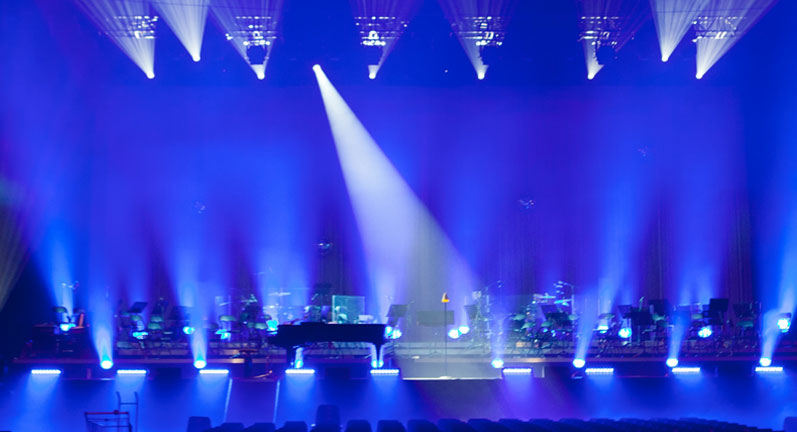 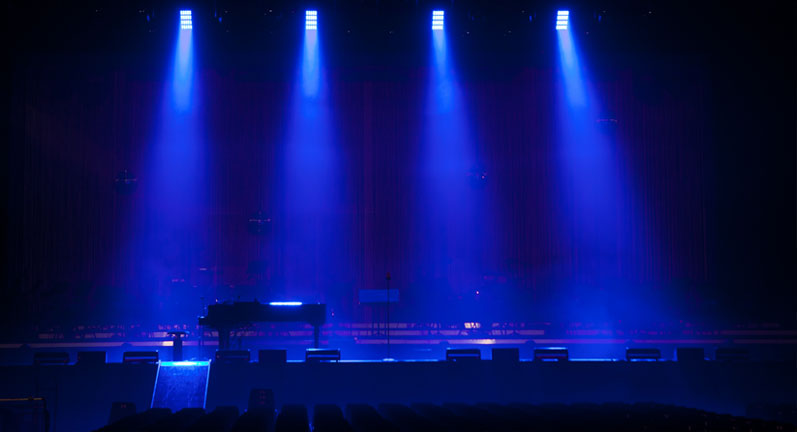 In order to create the lighting design for Julien Clerc’s symphonic tour, Dimitri Vassiliu, first and foremost, had to take into account the requirements of the sound recording for the 40 musicians of the symphonic orchestra on each date of the tour. It goes without saying that the noise from the projector’s ventilation systems captured by a bunch of microphones, would inevitably find its way into the broadcasting system.

The lighting designer chose to set up Ayrton’s WILDSUN 500 LED RGBW moving heads near the musicians, upstage, for the quality and level of their white and coloured light, for their zoom range that pans out wide or zooms in close, but also because they are quiet. They are equipped with a sophisticated cooling system involving a circuit containing heat-transfer gas that dissipates the calories of the 31 15-W LED sources in an oversized heat sink. Dimitri Vassiliu also likes the management of the LEDs through light-rings.

He naturally also chose the small ROLLAPIX LED lightstrips, motorised in tilt mode, in whose development he took part. Their 8 RGBW sources, individually controllable, are cooled by natural convection thanks to a specific, oversized heat sink.

Dimitri set up this small, very discreet luminaire to create a strip downstage, its motorisation in tilt mode and its zoom allow to illuminate the musicians or to send powerful white and coloured light rays to the audience. It is a very well-designed machine that is set up on the floor without being hampered by the connector technology that is under the base and which, when turned off, becomes almost invisible.

Perfectly silent also, the four ultra-powerful ICECOLOR 500 luminaires, with passive heat pipe cooling system (heat-transfer gas without ventilation) secured on the bridges, each using 40 15-W LED RGBW. All the machines use the same LED module, which guarantees perfect colour consistency. For the console operator, it means peace of mind and represents a huge time saving.

The only concession to ventilation noise was made by the lighting engineer to the Vari Lite VL 3000 Spot secured on the bridges far from the musicians. It is still impossible to create beam and gobo effects with LEDs, but it won’t be long… Isn’t that right Mr Ayrton?