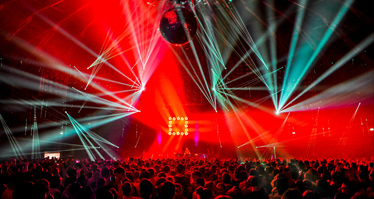 The MagicPanel fixtures were rigged in a 5 x 5 matrix on a custom-built truss framework and used to stunning effect throughout the night.

“We made a real feature of the Ayrton MagicPanels,” says Schimmel. “We mounted a video screen behind the MagicPanel matrix to create more depth and contrast. We also lit the units themselves in such a way as to focus on the fixtures so the audience could see these things were moving for real. Their movement became part of the visual entertainment.”

The special effects created by Schimmel using the MagicPanel matrix produced a spectacular show which really highlighted the fixtures’ versatility and dynamism. The bank of brilliant light was used alternately as audience blinders, to highlight the DJ and to add dramatic sweeps across the revellers. Full use of the individually controlled pixels and the continuous pan and tilt features were employed as Schimmel created abstract geometric and random patterns across the face of each panel, used banks of single pixels to send out pin-sharp shafts of light, and cranked up the power across the full panels to shoot powerful omni-directional beams out into the auditorium. Most crucially, Schimmel used the fixtures to show the numbers in the countdown to New Year 2014.

Schimmel and his show team employed many of MagicPanel’s on-board effects throughout the night, but customised the majority of looks using a Pixel Perfect system controlled by a Green Hippo Hippotizer. “A lot of hours were spent in the preparation of what would we like to do with this bright fixture rack,” says Schimmel. “EML crew chief, Martijn Roosen, created a network of ELC nodes in pre-production and our ‘LED Hippotizer’ operator, Menno Velders, programmed the show and found the MagicPanel units easy to work with.”

Schimmel chose the MagicPanel fixtures after he was introduced to them by his video provider, LEDlease. “When I saw it I recognized that MagicPanel was something new and exciting with the promise of a magically brilliant – and extremely bright – effect,” he says. “They certainly did not disappoint!  We were able to create some really spectacular effects for the party and were really happy to be able to surprise our visitors with something totally new. The whole crew loved working with something new and it is cool to get so many dedicated reactions to a fixture!”

The MagicPanel units were supplied by Ayrton Benelux distributor, Face, to Belgian-based Art of Confusion, and thence sub-rented to PRG/EML Productions for the party.

All photos copyright of ®Photo-company.nl