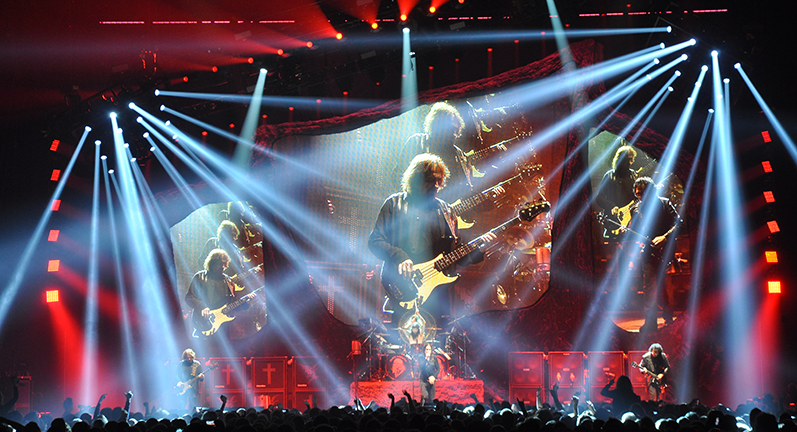 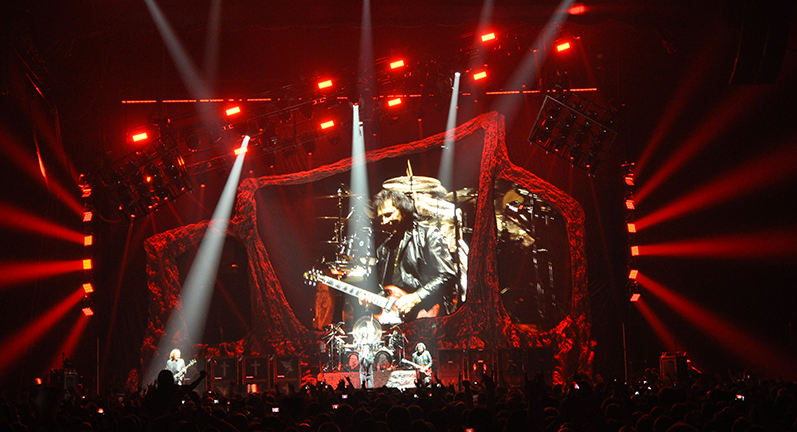 “The design is actually by Baz Halpin at Silent House,” Keller begins, “but the cue structure and how we light each song is basically me. Baz is very generous in that respect – yes, he certainly provided some colour keys for specific songs and contributed comments throughout the programming, but I did all the programming and had a lot of freedom within that context.”

The show’s stage set defines the stage and lighting rig, in that three screen areas are framed by faux cave entrances, which create a clear uphill slant from stage right to left. This is mimicked by the lighting structure with the trusses following the slope across the stage.
There is a lot of LED screen across backstage, enough to fill the full stage, though only around 70% is visible to the audience, peeking as it does through the ‘cave’ portals of the scenic backdrop. Keller bemoans the fact that the video ‘is so bright’, but neglects to mention how well he corrals the lighting gear to counter the three beady eyes of LED.

The three main elements to the fixture inventory add to the challenge of the super-bright LED screens. These are MAC Viper Pros, VL3500 Wash FX, and Clay Paky Sharpys, amongst which the Ayrton MagicPanel must hold its own, and does so admirably.

“The original design also had other fixtures for the Torms and some floor positions,” said Keller, “but Neg Earth, who supply the system for Europe, gave me some Ayrton Magic Panels to replace the fixtures on the Torms: this was my request, I’ve wanted try these yoke-mounted LED light panels for some time. I’ve known Dave Ridgeway [Neg Earth] for a long time and he generously agreed to let me try them. I’ve been tempted by them because it’s a new tool. Six by six LED panels, you can continuously rotate them – not quite so useful in this design where we’re playing a conventional house, but were this an in-the-round show that facility alone would be well worth it.”

Keller demonstrated the effect; the panels are extremely bright and project a powerful but slightly diffuse beam. To watch them is akin to seeing a four-cell Molefay spinning endlessly. “Of course you can address each pixel, which means 144 channels for control, but that makes no sense in this show. However, used in their primitive mode (fewer DMX channels) they make for intense blobs of light, that suits the show.”

While Keller didn’t contemplate streaming video through them to create lighting effects, he did use facilities that are pre-programmed into the panels – like swirling colour changes sweeping across the face of each panel – and to great effect. “They’re also pretty heavy so on a Torm, once you start rotating or panning, the hanging structure begins to oscillate, so you have to be cautious and time your moves. In the end I just wanted to play with a new fixture and this was a non-contentious environment in which to do so; in that respect, Neg Earth have been brilliant.”

Keller uses a GrandMA2 Lite to operate the show: “We use ArtNet-to-DMX boxes on the truss; I’ve used the MA Net and don’t really see any difference except you can run bigger systems.” He paused and considered his own words: “Well, I guess now I’m thinking about those Magic Panels at 144 channels each, maybe MA Net makes more sense?”

Moles, who first saw Black Sabbath in 1970, concludes: “The lighting for this tour is positively 21st century compared to what was available in 1970… It looked great: Keller made Halpin’s design zing with all the visual vigour the band lacked.”