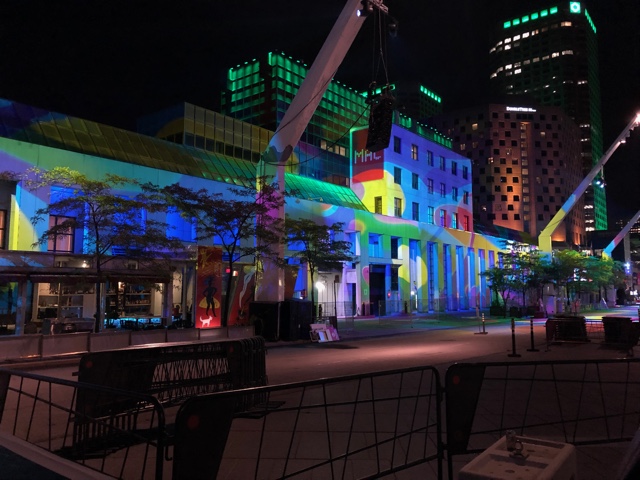 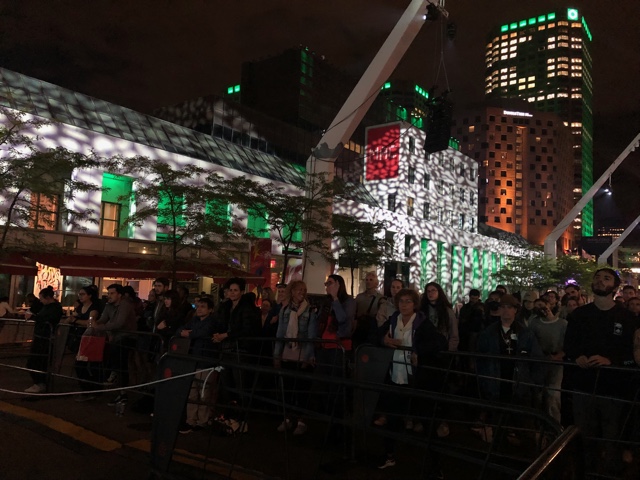 Twelve Ayrton Domino-S fixtures, part of Ayrton’s IP65 multi-function luminaire family designed for intensive outdoor use, played a variety of roles at Les Francos de Montréal and the Festival International de Jazz de Montréal, staged back to back in September this year due to COVID-19.

Les Francos de Montréal is a large annual pop music and performance festival featuring French-language performers from around the world.  It has been held for more than 20 years.  The Festival International de Jazz de Montréal holds the 2004 Guinness World Record as the world’s largest jazz festival; every year it features about 3,000 artists in more than 650 concerts and welcomes 2 million-plus visitors.  This year’s 41st edition was reduced in size due to the coronavirus pandemic with all shows taking place outdoors.  Both events were centered around downtown Montréal’s Quartier des Spectacles.

Solotech in Montréal provided the Domino-S fixtures, which combine extraordinary light power with a full feature set in an IP65-rated, minimalist-designed fixture that can resist hot or cold temperatures, wind, rain, hail, salt, fog, sand and dust.  Solotech supplied all the lighting, video and audio gear for both festivals.

Nicolas Labbé, senior technical specialist, business development at Solotech and a lighting designer himself, had seen and tested the Dominos and knew they would fill the bill for Les Francos and the jazz festival.  “I was really impressed by what they could bring to the festivals: their intensity and resolution, the richness of the colours, no hot spots at all, and no need for weatherproofing covers that destroy the look.”

Bruno Rafie, lighting designer for both events, hung the Dominos 35 feet in the air on giant, arm-like mega-structures positioned on the street during the festivals.  The multi-functional Dominos served as house lights and texture for the public entering the entertainment area, provided illumination for TV reverse shots, and acted as architectural lighting on the Musée d’art contemporain de Montréal, whose façade was to the right of the public.

Rafie, who has designed the festivals for the last ten years at the Quartier des Spectacles site and who has an even longer history with the festivals, typically needed 64 LED PARs to light the plaza.  In addition, for the winter festival Montréal en Lumière he’d used moving lights on the structures but had to enclose them in housings to weatherproof them.  “Now, I only needed twelve Dominos, which made for a big saving of time, energy, trussing, cabling and focus,” he says.  “They were easy to set up and program, much more versatile and no more installing ugly domes to protect them from the weather!”

The time-saving element of the Dominos was especially important this year when time constraints came into play.  “We had only 48 hours for the install, including the stage, compared to the week we usually have,” notes Dan Meier, technical coordinator for both festivals.  “I was really happy with the Domino solution.  They were easier and quicker to install and program: It only took us three-and-half to four hours to install them instead of a whole day.  Different colours and looks were programmed, but there was no need to refocus.”

The Dominos furnished top light and texture for the public entering the entertainment area to see performances at both festivals.  During shows the Dominos projected colour and gobos onto the museum and its 35 recessed columns to match the on-stage colours of the performances for a very “immersive look,” Rafie explains.

“The Dominos opened very wide for a top light on the big audience and gave us never-seen-before gobo effects plus animation wheel gobos,” he reports.  “They also had a nice CTO and had no problems when it rained a lot for several days.  I was happy that the festivals showcased what Domino can do.”

Meier recalls one performance that featured people on bikes with Bluetooth speakers riding among the audience.  “The moving lights patterned the places where the bikers were,” he says.  “The Dominos were much more flexible fixtures for everyone.  I was also impressed by their power – even though the Dominos were so high up, they were powerful enough for really nice effects.  I think they’re a really good solution for everybody.”

For his part, Rafie is eager to use Domino again and has other applications for the fixture in mind.  “I can’t wait to use them as stage lights next,” he says, “especially in the front lights position where they are more exposed to different weather conditions.”

Solotech’s Labbé looks forward to putting the Dominos to the test when temperatures really plunge in Montréal.  “We have the winter festivals and the Montréal en Lumière celebration of lights coming up next year,” he notes.  Below zero temperatures don’t stop festivities for hardy Montrealers.