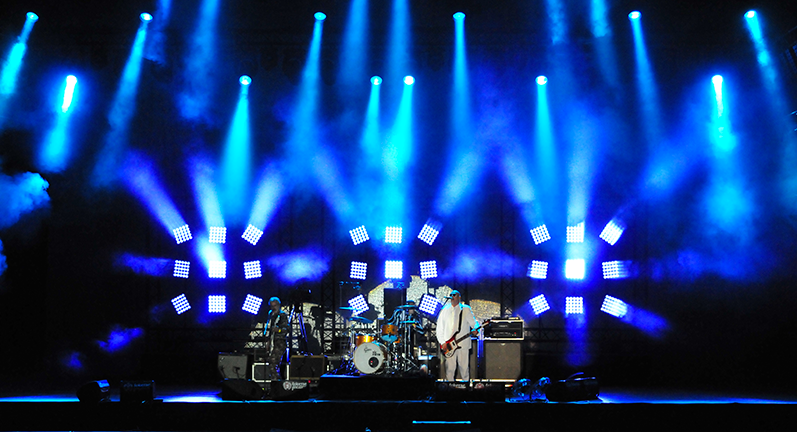 TRIGGERFINGER ON TOUR WITH MAGICPANEL™R

In 2012, Triggerfinger achieved a major international breakthrough with their unplugged glasses, cup and knife percussion riff cover of “I Follow Rivers” and earlier this year released a new album, « By Absence of the Sun ».
The release is supported by their 2014 European tour, hitting both venues & fes- tivals, and needing a brand new light show. As the band has a well-respected live reputation they asked their longtime LD, Michiel De Clerq, to create a new visual design for the tour.
Michiel states that, after a heavy search and comparison of different products, the Ayrton MagicPanel™-R really fulfilled his utmost creative dreams. This compact fixture combines a fabulous feature set in one unit: video effects, full colour strobe, wash light, endless 360° pan/tilt, RGBW colour pallet and, to top it, a beautiful native warm white with utterly subtle dimming curves – why look further…?
The gear is rented for the tour by VCL Productions, a Belgian rental company. Owner Vincent Clerinx states that, as he has followed the Ayrton product lines for a while, he was happy to invest in a new product with this spec sheet and believes in the long-term potential of the MagicPanelTM-R.
The design is based around 3 matrix grids each consisting of 9 fixtures, one grid per musician, giving each of them 225 x 15W / 4.5° RGBW LEDs to make them shine individually or glow together under a massive, dynamic wall of light. During pre-programming at the FACE studio, Michiel discovered how easy it was to create a setting that gave him the option to control speed, positions, colours and changes with his MA2 faders so he can follow the bands music on the fly, as they switch between quiet, intimate moments to emerged heavy riff and beats in a split second. He insisted on keeping live control without losing the versatile possibilities of the MagicPanel™-R. With the assistance of Geert Custers of FACE, the company which distributes Ayrton in Belgium, it took them 2 days to figure out the best way to achieve this, but the result is as magic as the name suggests.
Michiel De Clerq operates his MagicPanel units on a GrandMA console that is networked with 3 MA Nodes on stage. Short setup times on festivals called for a quick setup procedure, and a secure way to control all parameters. In order to achieve this, VCL Productions built a custom connection system that allows them to set up the 3 matrix units in no time.
From habit, Michiel De Clerq treats his lighting kit as a traditional parcan show, using only four colours throughout his entire show, but the extra options to play with the individual pixels, and the continuous rotation of both pan and tilt, gives him the extra flexibility he needs to make a diverse lighting show. Extremely secure timing makes it a very strong lightshow. After the first show, many video shoots of the Triggerfinger concert became popular on the media and got praiseworthy comments from Tokyo to Los Angeles, and of course it helps to have a stunning band too…thanks Ruben, Mr. Paul & Mario !