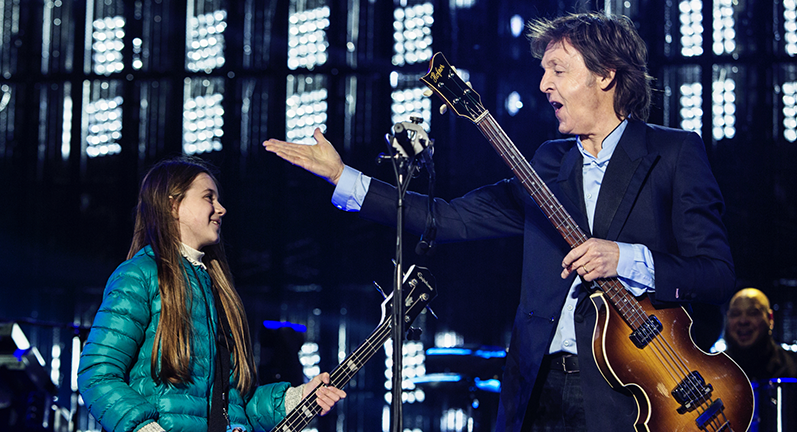 LEROY BENNETT GOES ONE ON ONE with MagicPanel™R

Paul McCartney’s One on One tour started in Fresno, California in April 2016 since when it has clocked up 41 shows, to date, across North and South America, Europe and Asia. The tour promised a 40-song setlist that celebrates McCartney’s legendary career set against a ‘dazzling re-designed set’, a promise which rings true having been brought to fruition by production and lighting designer, LeRoy Bennett.

Bennett has worked with McCartney for the last fourteen years, during which time they have established a collaborative working partnership which allows Bennett considerable freedom to develop show concepts that incorporate McCartney’s inspirations.

“For One on One we decided that it was time to upgrade what we’d been doing for the last few years,” says Bennett. “I wanted to create something new that was less two-dimensional than previous shows by introducing an abstract, three-dimensional aspect that would give the show a more volumetric feel.”

Bennett achieved this by building up several layers of lighting fixtures and video surfaces to create a depth that gives the audience an interesting perspective through the layers which changes from different viewpoints across the auditorium, and gives a wider viewing angle with more things to look at.

The result is a massive lighting and video installation that includes an upstage wall composed of 160 Ayrton MagicPanel™R units, arrayed in ten 4 x 4 clusters, in conjunction with a series of vertically rigged LED battens and moving head fixtures, all of which give Bennett different textures of light to play with. The wall is rigged on modular frames, built by the tour’s lighting contractor, Upstaging, Inc., which can be adapted to fit all sizes of venue on the tour.

“The MagicPanel™R fixtures were the usual robust, well-made fixtures we expect from Ayrton,” says Upstaging’s John Huddleston. “They worked well throughout the tour and gave us no issues – one of the reasons they are so popular with designers.”

Downstage of the wall are flown WinVision Air LED screens, and mid-stage and downstage layers of Nocturne V-Thru video screens. These are hung between a whole host of alternating rows of lighting fixtures in the overhead trusses, including a series of vertical LED battens from Upstaging which fly in and out, and a further downstage truss with more moving heads, and a row of audience blinders. “There’s a lot of lights!” says Bennett.

The whole adds up to a huge canvas on which Bennett builds layers of light and video content to interact with each other – the content playing through the lighting fixtures in the ceiling and interacting with the LEDs of the backwall, and playing through the V-Thru screens, even when up high in their home positions.

“My goal is to achieve a cohesive interaction between video and all the separate lighting fixtures so they work as one unit,” explains Bennett. “I have a clear idea of what I want to do for each number, beginning with the video content and deciding how we are going to interact with it to bring out the feeling in the song and create the right atmospheric emotion. To do this, I need fixtures that I can rely on to do what I need them to do, and the flexibility of the Ayrton products gives me so many options.”

Bennett is no stranger to Ayrton products, and has used MagicPanel™602 fixtures many times before, for Bruno Mars and Nine Inch Nails to name but a few. He chose to use the MagicPanel™R for the One on One tour, however, to take advantage of its added control and sharper, narrower beam. “And because it is a new model!”

The 160 MagicPanel™R fixtures form a signature feature of the backdrop as their distinctive square faces form a dynamic grid which runs the gamut of effects from audience sweeps and strobing, through to subtler lighting with morphing patterns and video content.

Preferring to array his MagicPanel™R fixtures in clusters for maximum variety, Bennett takes advantage of their pixel-mapping potential which allows him to use them as both a low-resolution screen and to project beams of light through the smoke-filled atmosphere.

Bennett also enjoys the dynamic flexibility of the units, the continuous rotation and 360° pan and tilt enabling him to create novel effects. “I can play with how to move the pixels; by picking one pixel in each unit and rotating the panel, for example, I can give it an interesting axis of movement. It’s what I love about the Ayrton products – the flexibility of what you get out of them.”

Bennett chose not to use the MagicPanel-R’s on-board macros but prefers instead to use the two GrandMA consoles needed to run the show to push the flexibility of the lights as far as he can, maximising the pixel mapping and feeding them video content.

“It’s easy to get lost and overwhelmed amongst all the possibilities,” says Bennett, “…so you don’t think about the possibilities, you think what you want to do and make it happen! With Ayrton, I know I have the flexibility and the unique qualities to be able to achieve what I want to do.”