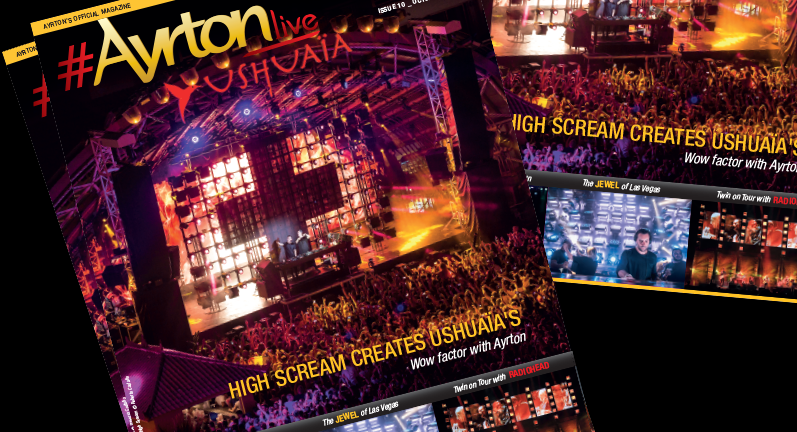 Welcome to AyrtonLIVE10, the tenth of our news magazines, which showcases Ayrton products and some of the great projects they appear in around the world.

Firstly, we are delighted to announce our MagicDot™-R has been awarded Live Design Product of the Year 2016. We are honoured that Ayrton’s innovation has been recognised at the prestigious Awards Ceremony for the second year in a row, following MagicBlade™-R’s receipt of the accolade in 2015.

Show reports is this issue illustrate some of the fabulous uses that MagicDot-R has been put to by lighting designers including Stephen Douglas for The Killers tour, Fredrik Jönnson whose MagicDot-R ‘robot army’ was a central feature of this year’s Eurovision Song Contest in Stockholm, and Litecom’s Mikkel Samuelsen, for an outing to the Weekend (WKND) Festival in Sweden.

In other news, lighting designer Dimitri Vassiliu has been trying out the Wildsun™-K25 on tour with French band, Les Insus; Stephen Aue has taken IntelliPix™-R and MagicRing™-R9 out on tour with German rock band, Silbermond; and Andi Watson has debuted the DreamPanel™-Twin on a worldwide tour with Radiohead for his first experience with Ayrton fixtures.

DreamPanel™-Twin also features in the first of our two venue reports as a focal point in the redesign of Hakkasan Group’s newest nightclub, JEWEL, in Las Vegas’ Aria Resort and Casino. The elite club, which opened in May 2016, is one of the first installations to feature DreamPanel™-Twin, which operates in conjunction with MagicDot-R and CosmoPix-R fixtures to give guests a truly glittering experience.

Our second venue report comes from the party island of Ibiza and focuses on the unique Ushuaïa Beach Hotel and Club and the brilliant team at High Scream, led by Romain Pissenem, who have redefined the clubbing experience into a form of ‘electrotheatre’. They have been partying all summer on the island, with top DJs and Ayrton fixtures helping to create that Ushuaïa ‘Wow’ factor.

SoundLightUP has contributed two fascinating interviews, the first with Alex Hardellet, lighting designer for The Avener on the Flash Deep Tour, which reports on the concept of All Access Design’s interactive artist-controlled lighting of a lighting rig which incorporated MagicBlade-R and DreamPanel-Twin fixtures.

The second interview is with Jeff Ravitz, long-term lighting designer for Bruce Springsteen and the E Street Band, and Ayrton advocate. Ravitz included a plethora of Ayrton fixtures when he used modern technology to recreate a good old-fashioned rock and roll look for the revival tour of The Boss’s legendary album, The River.

Our bench test in this issue looks into the workings of one of Ayrton’s latest, and most individual, fixtures, AlienPix™-RS. This little monster is a unique, multi-rotational luminaire with six tight, individually controllable beams and eight axes of indexable or continuous rotation. Designed to bring totally new possibilities to the lighting designers’ palette, it creates effects that are out of this world!