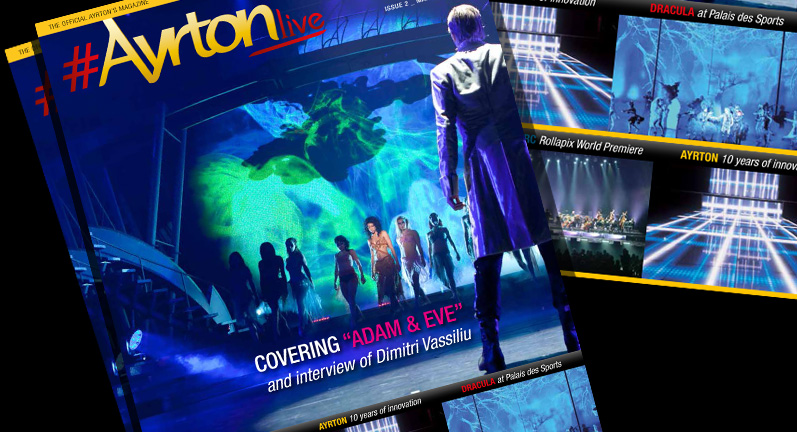 After 2011 saw the successful launch of the WILDSUN 500 and ICECOLOR 500, 2012 starts with a bang for Ayrton, with the arrival of the ROLLAPIX and VERSAPIX striplights, the two LED innovations that are presented in this issue.

Chosen by the famous French lighting designer Dimitri Vassiliu to light major performances such as the 2012 Victoires de la Musique, lit with an ARCALINE 2 and WILDSUN 500 C, they perpetuate the trust that French directors of photography have in Ayrton products.

In addition to installing WILDSUN 500 behind the musicians, the designer chose the small and discreet ROLLAPIX for very subtle lighting, thanks to their 8 RGBW 4-in-1 sources, and the automation of their tilt, but also for their design and silent cooling.

Equally silent, the ICECOLOR 500s are also present in this set-up, which is rich in colours and soft beams.

It is for the same reason that on the comedy musical Adam and Eve, Dimitri Vassiliu continues to put his trust in the AYRTON LED projector, placing the ROLLAPIX lights in front of the stage, and using the new Versapix to form a giant light ball.

The WILDSUN 500 C moving heads are used on display and on the bridges, to light the Mark Fisher set, complemented upstage by the ICECOLOR 500s.

The famous French lighting designer, Jacques Rouveyrollis also opted for LEDs to illuminate the musical comedy Dracula, directed by Kamel Ouali, playing to sell-out crowds at the Palais des Sports de Paris. Based on the recommendations by Cyril Prat, project manager for the Dushow company, he hangs WILDSUN 500 C moving heads alongside the big names in striplights and shares his soft spot for their precise and perfectly calibrated white on all projectors included in the kit.

In 2012, Ayrton celebrates 10 years of innovation and its founder and CEO Yvan Peard, discusses the history of the company.

From 2004 with the MODULED, the first LED unit, the DREAMPANEL or the unmistakable WILDSUN 500 series, to get to the latest arrivals of the year, the ROLLAPIX and VERSAPIX strips, we understand that innovation is at the heart of AYRTON’s concerns and those of its director, who confirms this in stating that « Innovation is the desire to always push the envelope, more than others or in another direction ».

For its 10th anniversary, therefore, Ayrton returned to the origins of its name, and pays tribute to Ayrton Senna by installing a genuine Formula 1 on its stand at Prolight+Sound, and by putting on a colourful and saturated light show that is stroked by the beams of WILDSUN 500 wash moving heads.

With over 190 luminaires in play, the show presents the latest Ayrton developments and its iconic projectors.

Finally, we mustn’t forget the beautiful annual holiday lights put up in the French city of Lyon, where the Fourvière Basilica is lit this year by