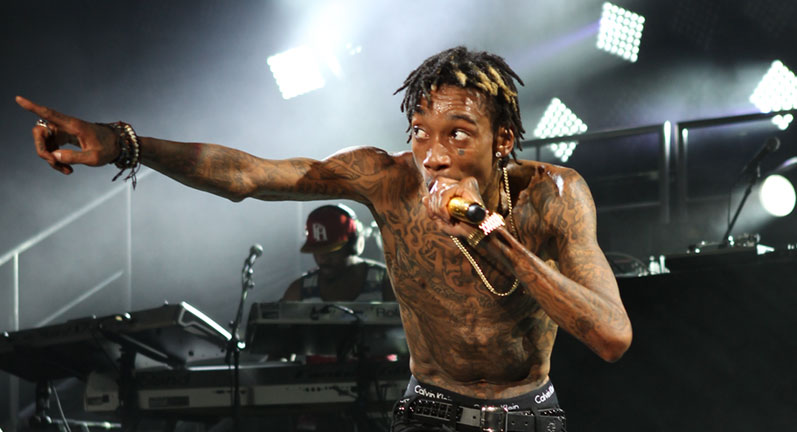 WIZ KHALIFA UNDER THE INFLUENCE… TOUR

Lighting designer, Jason Bullock, has incorporated no less than 64 Ayrton MagicPanel™602 into his lighting design for American rapper Wiz Khalifa’s Under The Influence of Music tour.

Bullock discovered MagicPanel on a video of their launch at Prolight + Sound 2013. He was so impressed he just “had to have them!” and approached US rental company, Upstaging, to mustered as many units as possible.

A total of 64 units was available at the time and were incorporated into Bullock’s design for the US leg of Khalifa’s tour.  Bullock was then able to downsize this number to 32 MagicPanel units for the smaller venues of the European tour.

The MagicPanel units were arrayed in 4 x 4 configurations and installed into four custom-built ‘pods’ that can be moved on wheels for easy transportation and fast load in and out. The MagicPanel pods flanked Khalifa and his band where Bullock used them both to illuminate the artist and as audience blinders.

The MagicPanel units were more than able to hold their own against a large rig of moving head fixtures. The extreme brightness (12,000 lumens) of MagicPanel combined with the narrowness of its beam (7.5°) provide a great light output and a perfect beam definition. Yet, because each of MagicPanel’s 36 LED emitters is independently controlled, each panel could be toned down to blend in with the rest of rig, even those with non-LED sources.

Bullock also took advantage of the MagicPanel internal effects and bitmapping capabilities to break up the beams and tone them down, for example, using square chases with a bitmap running underneath. “… You see just pieces of the square come out and it works very well as a masking layer,” he said. “You can run colour effects and stuff on it and use that as a blackout filter, and just keep that pattern there.”

Bullock also used a Smiley face emoticon macro across all 64 units during the Young, Wild and Free number. “I put them all pointing at the audience, turned them on,” he continued. “Whacked me in the face and it was just like, ‘Oh, yeah… I’ve been waiting for this!’ And it’s nice that you have both static patterns and the moving ones. Gives a really good variety. I think it’s wonderful.”

MagicPanel’s continuous pan and tilt feature also impressed Bullock which he deemed ‘incredibly accurate’ in maintaining their focus/position in DMX control. “To be able to do that continuous spin surprised a lot of people…They just keep going and going and going, and then they can go the other way. People just didn’t know what to make of that.”

Ayrton MagicPanel 602 requires 160 DMX channels when used in extended mode so Bullock chose to control them using a Chamsys console which could handle this volume easily, and is able to run several layers via its in-built bitmap engine without the need for a separate media server.

Bullock also vouched for the durability of MagicPanel while on tour, observing how the 32 units used in Europe started up without a problem after travelling to the first European date in Paris last summer: “They are absolutely wonderful,” he said. “We turned them on this morning, after being on a boat coming across in a sea container. We had put pieces of foam on the front and the back just to stabilize them, rolled them out. We uncovered them, plugged them in and “pzzzt”, not a problem at all.”