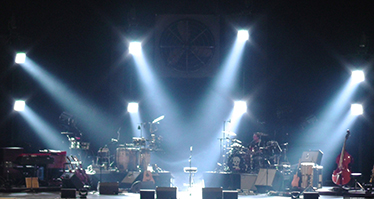 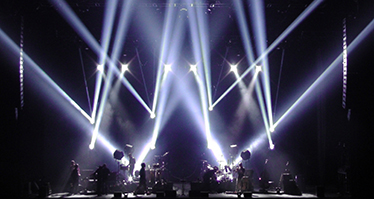 True to his artistic principles, Laurent Chapot, visual designer for French rocker Bernard Lavilliers, decided to add the Ayrton MagicPanel™ to the four totems/windows on the stage at the singer’s recent Paris Olympia concert.

For a number of years now, he has been using an eclectic choice of gear that is not only energy-efficient but also economically configured for optimum setup and teardown time and transport. Above all, the gear must be adaptable to a wide range of concert venues.

He has chosen low power consumption LED luminaires that, besides being lighter in weight and less costly to operate, are faster and more efficient especially when using primary colors. These savings allow him to indulge himself a bit in specifying the latest equipment for his lighting design concepts. As a result, when Laurent discovered that the MagicPanel™602 was available with an optional mirror on the reverse side to create a big beam moving LED head plus moving mirror fixture, he naturally chose to equip his four totems with two of these combination fixtures per column.

“I wanted to use both LED matrices and moving mirrors,” Chapot explains, “and with the MagicPanel™, with a mirror on the back, I have two machines in one, and even more! Better than a big wash light, this unit leaves me plenty of options and has magnificent colors, and I really love having it as part of my gear. The addition of a mirror is perfect for deflecting or reversing the beams.”

The totems are like windows that add light to the sparse and lean stage decor preferred by Lavilliers. Wary of using video on stage, the singer finally bought into Chapot’s design concept, which uses “Black Face” video panels hung invisibly in the dark alongside the Ayrton MagicPanel™ units. This rig is totally integrated into the stage lighting, showing a perfect sense of proportion and taste.

« The totems must be used with discretion, as I said, to comply with the artist’s vision and also give the impression that you’re in a concert hall with windows that reveal all the media content.

Between the two columns of screens that form each totem, we hang two Ayrton MagicPanel™ luminaires that act as big fat washes but can also react to the video and spot lights that house them. Thanks to the optional mirrors, we can create some original and highly animated effects by deflecting and splitting the projector beams.”

“At first, we used the MagicPanel™ sparingly,” Chapot goes on to say, “mostly as a scenic element and for the mirrors, using just a few internal macros, always aware of the artist’s desire for simplicity. But then, we pushed the fixture to its full potential. It would have been a shame not to. The audience really enjoyed it. It is a super machine, even if the number of DMX channels is high in this utilization.”

On stage, to complement the mix of high tech, magnificent video panels, and the always amazing Ayrton MagicPanel™602, this ingenious visual designer and his collaborators, like decorator Philippe “the Squirrel” Ducouret, have added brilliant creative touches to the lighting.

While Laurent Chapot’s lighting concepts spring from his ever-changing creative imagination, the realizations of his designs are precise to the millimeter, always graphically exact and appropriate.

He has a talent for getting the most out of his luminaires, and the proof is in what he does with MagicPanel™: creating incredible graphic columns of white light, and using infinite pan/tilt rotation with mirrors to generate multiple intense beams that completely fill the beautiful Paris Olympia concert hall with incredible light.