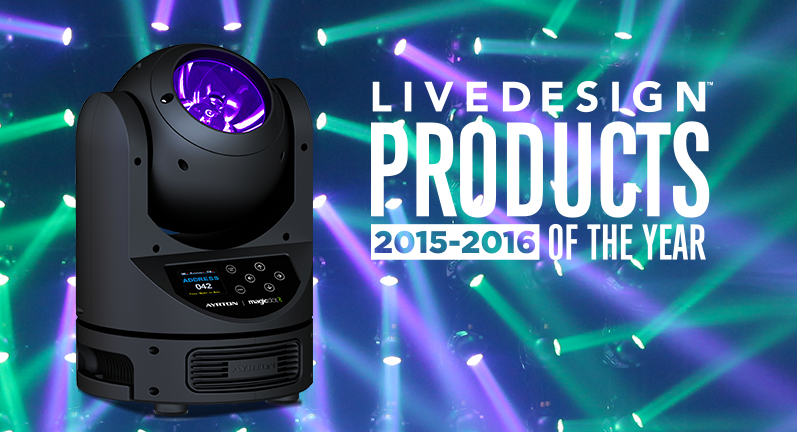 A member of Ayrton’s Radical product line, the patented MagicDot™-R is the first professional moving head LED luminaire with a single optical collimator. Using a new 60W RGBW multi-chip LED paired with a 94mm high-efficiency collimator, in a unique and distinctive form factor, MagicDot™-R delivers an intense uniform 4.5° beam with a high CRI and a palette of rich saturated and pastel colours.

The judges said MagicDot-R was ‘fun and unique’ and chose it for a Product of the Year Award because of its power and agility, stating: “The MagicDot-R puts a refreshing effect fixture into the designer’s palette. Its lightning fast movement, repeatable positioning, and full 360-degree rotation make this one of the most unique fixtures to have been brought to market in years. It opens the door to many great design ideas.”

Since its release last year at Prolight + Sound, Frankfurt, MagicDot-R has been put to spectacular use by some of the best lighting designers in the world today, including Cory Fitzgerald, Mike Swinford, LeRoy Bennett, Mark Butts and Dan Hadley, for artists including Bruno Mars, Jason Aldean, The Weeknd, Little Big Town, and of course for the famous ‘Grohl Throne’ for the Foo Fighters.

« We are delighted to be awarded a Live Design Product of the Year for a second year in a row,” says Ayrton’s Valère Huart. “I think it is a wonderful acknowledgment of Ayrton’s dedication to innovation. Knowing that the jury is composed of experienced designers and programmers, we can be only really proud. Let’s continue the story next year!”

Paul Weller and Keith Bennett of Morpheus Lights, Ayrton’s exclusive US distributor, accepted the award on behalf of Ayrton.