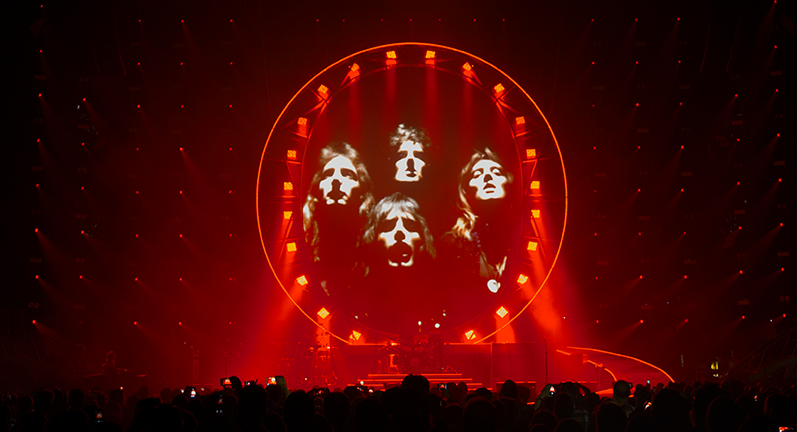 Ayrton, French manufacturer of original LED lighting solutions, is proud to announce that its MagicPanel™602 LED panel fixtures are touring the world with the 2014/15 Queen + Adam Lambert world tour.

Following this summer’s sold out dates across the Far East, Australasia and North America, the champion combination of Queen + Adam Lambert is due to embark on a 26-date (11-country) tour of Europe in early 2015. From the very beginning, lighting designer Rob Sinclair chose to light the show’s iconic centrepiece, a giant ‘Q’, using Ayrton MagicPanel™602 LED lighting fixtures.

“I have worked with Queen since 2012 and know that Brian May and Roger Taylor have definite ideas, born of long experience, in the production values of their shows,” explains Sinclair. “When they requested the reproduction of the iconic ‘Q’ stage for the tour, I knew we needed a lot of lights to create the huge Queen look.”

When it came to lighting the central feature, Sinclair chose 24 of Ayrton’s MagicPanel™602 units which he rigged at regular intervals around the curved truss to delineate the shape of the Q: “I needed something small and bright to fit inside the main Q set-piece,” he says. “I knew that Upstaging Inc, who supplied the tour (with help from Chameleon in Australia and Neg Earth in Europe) had the MagicPanel units and they seemed to fit the bill well. They were bright enough to make an impact and small enough to be built into the set, where they have travelled in situ without problem.”

MagicPanel™602 is a 6×6 matrix of 15W RGBW LED emitters, each of which projects a tight, powerful 7.5° beam. Each emitter can be controlled individually or used collectively to produce a coherent 15,000 lumen shaft of light, using only 600W of power. MagicPanel™602 can rotate continuously on both its pan and tilt axis.

Sinclair uses the MagicPanel array to highlight the internal structure of the Q-truss and to create midair effects that framed the circular projection screen within. “They are a great backlight coming down onto the stage,” he says. The MagicPanel units were also used to create chases, shoot beams of light into the audience and accentuate the shape of the truss as it was lowered forward to a horizontal position.

“I didn’t need the complexity of the full individual LED control the MagicPanels offer, so chose just to use them in 20-channel mode to keep the channel count to a minimum,” he says. “I used some of MagicPanel’s built-in effects, but rarely.”

Sinclair’s programming was significantly simplified by the technical team at Ayrton which created bespoke software specifically for the show. “The guys at Ayrton wrote us some custom firmware to turn off the corner LED emitters of the square panel,” Sinclair says. “This gives an oval beam to mimic the set which works really well coming out of the Q-frame. Without it, it would very much have been a square peg in a round hole!”

This was a ‘first’ for Ayrton which had never created custom code for the MagicPanel until this tour, but was encouraged to do so by Keith Bennett of Morpheus Lights, Ayrton’s exclusive US distributor, working in conjunction with Upstaging, Inc.

Queen + Adam Lambert’s European tour starts in Newcastle, UK in mid-January 2015 before moving to mainland Europe throughout February and returning to the UK to finish at Sheffield Motorpoint Arena on 27 February 2015.