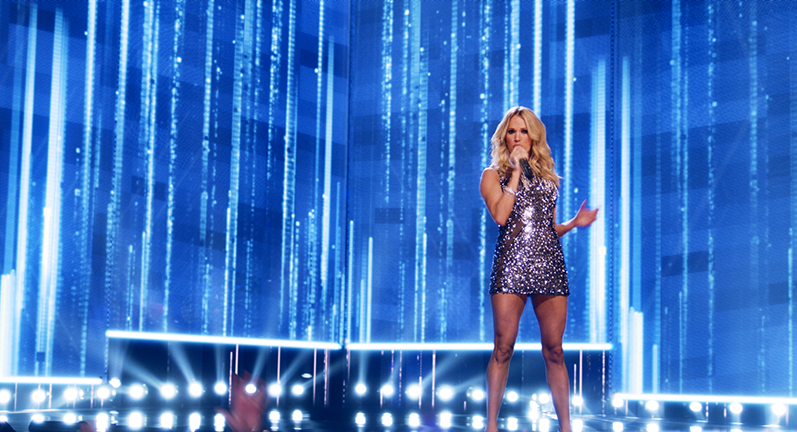 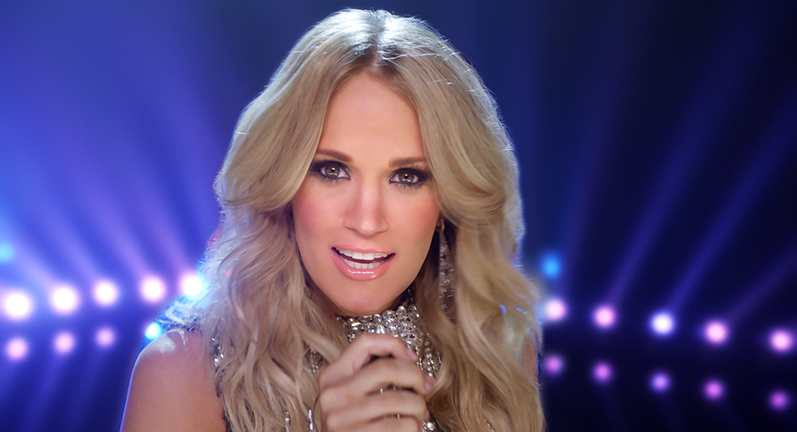 This year marked a style change – described as Nashville meets Hollywood – with the creation of a large virtual video backdrop and a new arrangement of the famous theme tune, Waiting All Day for Sunday Night, which Underwood performs in front of a live audience, amid real and projected appearances by top NFL players.

Underwood’s performance takes place on a high-gloss, diamond-shaped stage against a black backdrop, which became a gigantic video screen through the magic of visual effects. This angular layout presented significant challenges for the Lighting team. Director of photography, Chuck Ozeas, deferred the design of the concert lighting to Benoit Richard who was able to bring his rock and roll touring experience to bear on the theatrical lighting elements of the show.

Thirty free-standing MagicDot-R units were installed just below stage level on a recessed drop-shelf which lined the two downstage edges of the diamond stage. Richard used them to project through the audience and bounce light off the front edge of the shiny stage surface. “The MagicDots on the shelf were the perfect height,” he says. “They were unaffected by the hands and heads of the audience, and gave great silhouettes to camera as well as cool lighting effects. The glossy floor material lent an extra dimension by giving double reflections off the front edge of the stage.”

Thirty more MagicDot-R fixtures were rigged around the diamond stage’s upstage edges, ‘yoked out’ on 1.5ft vertical truss pipes which lifted them clear of the floor and orientated them straight out towards the audience. This enabled Richard to maximize the effect of the shiny stage surface without interfering with the black backdrop. “The rigging angle didn’t affect the MagicDots’ performance at all,” he says. “I used the pan to create a continuous moving fan effect behind Carrie, making full use of the colour palette as well as the movement. On camera, the reflections in the stage surface gave the effect of a double row of MagicDots behind her as they moved in slinky curves, doubling the impact.”

Richard is no stranger to Ayrton having been the first lighting designer in the US to use Ayrton’s MagicPanel™-602 when Underwood made her first appearance on the SNF Open in 2013. But this is the first time Richard has had the opportunity to use the new MagicDot-R: “I watched the MagicDot on one of Ayrton’s famous internet demo’s and instantly saw it was unique. I was determined to use it on a very special occasion and what better than the SNF Open? This is the Number 1 TV show in the US and I am always determined to showcase the latest technology in the video shoot to highlight the brand of the NFL and SNF.”

So what was it that attracted Richard to the MagicDot-R? “It made total sense to use the MagicDot in the Open which is basically a massive ‘rave’ setting this year,” he says. “I wanted the floor lights to be the major highlight to cut through the massive space and gigantic video surface surrounding the performers. I knew that the virtual video screen would feature huge images of the players and would be very bright, so it was important to have a floor package that could make the Artist and the Players stand out. The MagicDots have a powerful output but are so small, I could align them tightly together with just 1.5ft between their centres which was a great way of delineating the stage area. Their brightness and movement made a big impression on the main stage.”

What did Richard think of his first adventure with the MagicDot-R? “I love them – they are very cool fixtures and the possibilities are endless! Ayrton is a great company. They are not afraid to build gigantic rigs for their internet demos that really catch the eye and imagination. It gives you confidence when working on big scale projects, knowing what can be achieved and that you have the support and quality of Ayrton behind you. The whole experience was fabulous.”

The Ayrton MagicDot-R fixtures were supplied for NFL’s SNF Open shoot by VER and are distributed in the US exclusively by Morpheus Lights.