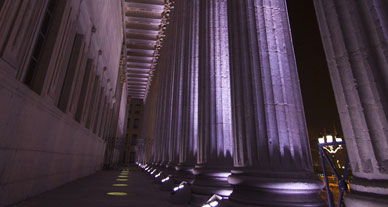 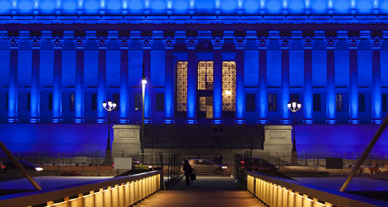 One of the most famous monuments of the « old city » of Lyon (Vieux Lyon) in France, the Palais de Justice de Lyon, recently benefited from a new exterior lighting installation which uses an array of LED lighting fixtures from Ayrton to accentuate its architectural magnificence.

Ayrton, French specialists in intelligent LED lighting products for Entertainment and Architectural applications, has provided fixed installations for a number of historic monuments, of which the Palais de Justice is just the latest.

Inaugurated in 1847 and often referred to the ‘Palace of the Twenty-Four Columns’, the Palais de Justice de Lyon was classified as a Historical Monument in 1996 and is one of the finest neo-classical buildings in France.

To show its spectacular facade to its best advantage, lighting designer Jerome Donna from the Public Lighting Department of the City of Lyon chose a selection of Ayrton Arcaline2 3G 100, Arcaline2 3G 50 and Ice Color 250 3G fixtures that will provide the city with a permanent, highly visible landmark for years to come.

Each of the twenty-four Corinthian columns of the colonade is front-lit by a single Arcaline2 3G 100 and flanked by two Arcaline2 3G 50 that provide side lighting. A single IceColor 250 3G uplighter is then used as backlighting to wash the walls behind each column and delineate it from its background.

Finally, the details of the upper levels of the portico above are defined using both Arcaline2 3G and IceColor 250 3G that provide smooth, colour-constant washes.

The Courthouse is illuminated by white light throughout the main part of the year but, as all the Ayrton fixtures used feature RGBW LED, the colour of the lighting scheme can be changed when required. This will be used to full advantage during the world-famous Lyon Festival of Lights which takes place at the beginning of December. The festival, which has its origins in the Middle Ages, has taken place annually since 1852 and currently attracts around 4 million people to the city.