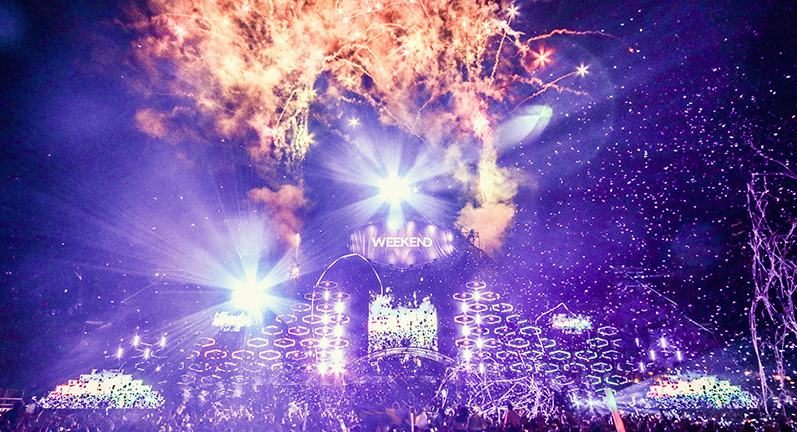 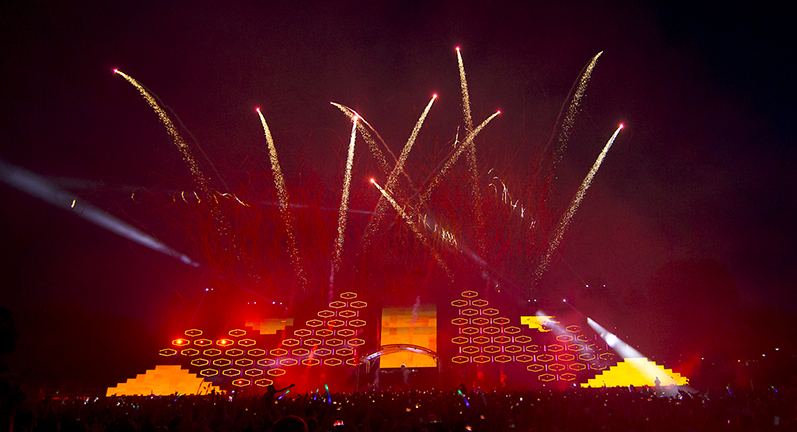 A Magical Weekend with Ayrton

Working with the Ayrton MagicDot™-R luminaires proved to be a rewarding and pleasurable ‘Weekend’ experience for Litecom’s designer, Mikkel Samuelsen, at the recent Weekend (WKND) Festival.

This uber exciting northern hemisphere event took place in Sweden, Finland and Estonia on the same weekend, at the start of August, with MagicDot™-R debuting at the Swedish Festival in Stockholm. Topline acts in the line-up included Fatboy Slim, Tiësto, Example and Tigerlily.

Samuelsen was asked to create a design for the main WKND stage and chose Ayrton’s MagicDot-R as a major component of the main lighting scheme. Samuelsen based his design around the idea of a series of ‘cells’ which, in turn, called for a small, but powerful moving light that could operate within the confined space of each cell. Each fixture needed to be small enough to fit within the ‘cells’ without interfering or blocking the other lighting systems, but at the same time be intensely powerful and manoeuvrable. Only Ayrton MagicDot-R was small and bright enough to fit the bill.

In all, 88 MagicDot-R fixtures were used for this complex design, each of which were fitted and mounted at a 90° angle into the audience-facing grid that flanked the stage, and was built using Litecom’s MX1 piping system.

The Ayrton luminaires were supplied by Litecom, Denmark, purchased from Ayrton’s exclusive Danish distributor, Atendi A/S. Extra MagicDot-R fixtures were obtained from Motion in Germany, as many of Litecom’s MagicDot-R’s were, happily, already out on other festival tours.

Litecom’s Girts Putelis worked with Samuelsen to produce the full visual solution for the stage, including lighting and LED video walls. He said, “The brief for the EDM stage design included specific instructions for low energy consumption and lightweight fixtures that could be rigged using only single clamps. MagicDot-R’s dimensions and LED source fulfilled all these requirements extremely well, with the added bonus of fast continuous pan and tilt. Although they are not IP-rated for outdoor use, we used our own Litecom-designed rain covers that worked exceptionally well to protect the MagicDot-Rs from the weather, and we are happy to report that the luminaires worked perfectly for the whole two days of the festival and proved very reliable”.

About MagicDot™-R
Compact, light and ultra-fast, MagicDot-R is a member of Ayrton’s RADICAL™ series. It is the first professional moving head LED with a single optical collimator and multi-chip RGBW LED, resulting in an intense beam of less than 5°.

MagicDot-R’s minimal cylindrical design is capable of continuous rotation on the pan and tilt axes, which allows endless groups of luminaires to be rigged in close proximity for stunning effect, yet each of which can be controlled individually. The fixture offers an overall flux of 1,800 lumen and a luminous intensity of 180,000 candela for an overall consumption of only 130 Watt. Weighing just over 200grams it is ideal for the creation of moveable virtual sets and complex light compositions with multiple beams.